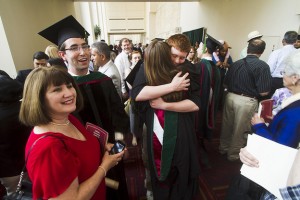 In some Indiana counties, as many as 75 percent of all college students leave Indiana after graduation.

It’s about 2 p.m. and Purdue student Matthew Spiller is listening to a lecture on immunology.

According to a study from Indiana University published earlier this year, about 50 percent of the people in his class will leave the state after they graduate.

It’s a problem experienced at all of Indiana’s public universities. The higher a student’s level of education, the more likely the student is to move away from the state after graduation. In fact, only about 16 percent of PhD recipients remain in Indiana’s workforce one year after graduation.

David Audretsch studies economic development at Indiana University’s School of Public and Environmental Affairs. He works on a variety of economic issues, but the relationship between education and jobs is one of his favorites.  He says city life often holds more appeal than country life for many recent graduates.

“It’s almost as if they’re gonna get smarter by locating to an urban area.” says Audretsch.

Basically, the corn belt has a lot of farmland. Which is fine if you intend to go into farming, but not so good if you have a journalism degree.

Kim Vu can tell you something about that. He’s the Sunday Styles Editor at the Washington Post. He’s very, very clear on why he left the state after graduating from Ball State’s School of Journalism.

There are only about 800 working journalists in the state of Indiana. For comparison, IU’s Bloomington campus graduates an average of about 400 journalism undergrads each year.  IUPUI, Ball State, the University of Southern Indiana and 15 other colleges and universities also teach journalism classes.

Matthew Spiller, the Purdue student, is a different case entirely. He continues to sit through lectures on immunology and works through chemistry labs.  Eventually, he’ll graduate with a degree from Purdue’s School of Pharmacy with plans to become the man behind the counter at the local drug store.

“That was what initially sparked my interest,” says Spiller. “This general patient misunderstanding of medication and medication safety.”

It never even occurred to Spiller to leave Indiana in search of employment and he’s carefully chosen a field which will allow him to remain in the state after he enters the workforce.

“There are a lot of opportunities in pharmacy,” says Spiller. “A lot of people associate pharmacy with the retail. The guy behind the counter, but clinically, pharmacist serve a dramatic import in hospitals throughout the nation.”

Spiller has chosen a field with a range of possible career options.  Even if he can’t find a position filling prescriptions behind a counter or consulting with hospital physicians on drug interactions, he’ll enter the workforce prepared for a range of chemistry and medical jobs.

Worried about "brain drain" in your area? Check out our interactive map by clicking on this image to find out more.

But it’s not just the job market that keeps graduates from staying in the state. IU researcher David Audretsch says it’s a matter of marketing. You don’t have to be New York City to draw in young workers, he says.  You just have to offer them something they want.

“In a way, we’re just like a company,” says Audritsch.”We have to manage the perception of our product so that people want it. We have to leverage what we have.”

There are some signs of improvement. Indiana’s overall retention rate has gotten better since the early 2000’s, settling at about 60 percent. But that still lags behind neighbor states such as Ohio, where as many as 78 percent of students stay after graduation.