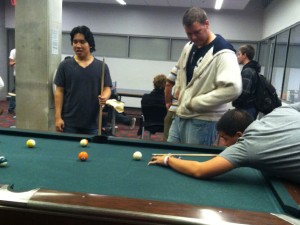 Sophomore Ricky Rojas (right, with pool cue) lines up a shot during a game with friends at IUPUI's Student Center. Rojas, 20, is not sure if he would take summer courses, even if tuition were discounted.

Politically, the benefits of cutting summer tuition for Indiana University administrators are clear: the move quiets criticism from state lawmakers over rising costs of attendance.

Financially, though, the benefits of a 25 percent cut to summer school tuition for in-state undergraduates are harder to calculate.

If university officials’ projection of a 10 percent bump in summer semester attendance in 2012 proves correct, still under half of all IU students systemwide would be enrolled in summer courses. Statewide, that would total more than $11 million in student savings (and foregone university revenue).

If calculating the financial benefits sounds complicated for the university, think of how complicated the calculation could be for students.

Take IUPUI sophomore Ricky Rojas: The 20-year-old Noblesville native is enlisted in the Indiana National Guard. Still, even with the military’s pay and benefits and $5,000 in student loans, Rojas says he has to work a second full-time summer job to pay for school.

Government statistics suggest he’s not alone. The most recent federal numbers on student employment available, from 2003-04, show 78 percent of undergraduates work while they’re in college.

“Me and many of my friends, we work throughout the entire summer — 40 hours a week — to pay for school during the actual semester, because we don’t have a way to work, and go to school, and have our own lives during the semester,” Rojas adds.

At the press conference where he announced the cuts, StateImpact asked IU president Michael McRobbie why officials decided to apply the tuition cuts only to summer courses:

StateImpact question: “Isn’t incentivizing students to take classes that would then save them money very different from just saving them money? Why don’t you just cut the cost out of year round courses as opposed to saying, ‘Well, if you take this, we’ll incentivize you to take this with these cuts, but only then will it save you money’?”

McRobbie response: “What our goal is here is to incentivize students to take classes where we have capacity, and right now, we have capacity over summer. This is a problem that universities have wrestled with for years — how to utilize those very valuable facilities that they have and to align the academic calendar better with the needs of the 21st century. So that’s what we’re doing, we’re taking advantage of the capacity we have over summer to hopefully attract many more students to all of our campuses.”

Rojas figures a 25 percent cut in tuition might attract him to summer school, though he’s not sure he’d take a full load of classes.

For him, tuition is not the biggest cost of attending school. Living expenses, Rojas says, take up much more of his budget — maybe $6,000 per semester, while his tuition and fees total roughly $4,500 per semester.

The pressure to pay the rising cost of a college degree, says IUPUI sophomore Roger Bishop, can be overwhelming.

“I think in large part, students are expected to get financial aid, so any students that can’t obtain that financial aid, it just seems like an insurmountable goal to try to make that payment every month or every semester,” Bishop, 21, says.

Indiana University says nearly two-thirds of its students — and about 75 percent of in-state students — receive some form of financial aid.