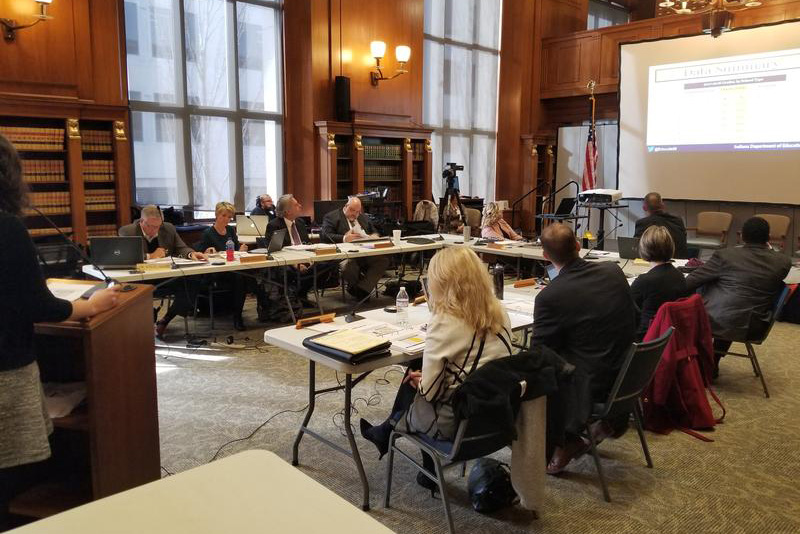 Members of the State Board of Education listen to a presentation on this year’s accountability grades at their November meeting. (Jeanie Lindsay, IPB News)

Nearly two-thirds of Hoosier schools received an A or B grade from the state this year, according to accountability ratings the State Board of Education made public Wednesday.

Schools are graded slightly differently depending on the students they serve. For high schools, multiple measures, in addition to student proficiency and growth, are used to determine state grades. Meanwhile in elementary levels, growth and proficiency are used, based on standardized tests.

State Board of Education vice chairman B.J. Watts says he’s proud of work being done in Hoosier schools, but wants to find more accountability measures to use for elementary grades.

“That would be the number one goal for me, is to try to come up with additional data points for K-8 to truly reflect what’s going on in those buildings,” he says.

The state accountability system changed in 2016 to include a greater focus on student progress, and most schools received high marks on their growth measures this year. Watts says it’s important to look at growth in schools, specifically as a step toward student proficiency.

“The state grades are the only thing that is important to us as far as accountability goes,” he says.

Union School Corporation, outside of Muncie, was the only district to get an F rating. There are 17 school corporations appealing their state grades, and the state board will deny or grant those appeals at a later meeting.