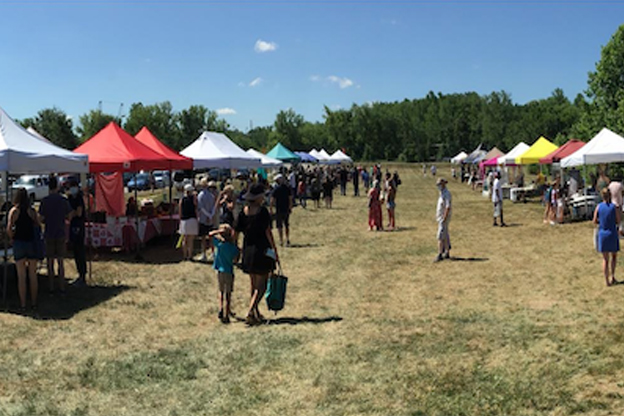 The Bloomington Winter Farmers’ Market’s third summer market day will be this Saturday at the Woolery Mill.

Representatives of the People’s Cooperative Market sent an open letter to leaders of the Woolery Market earlier this month, asking how they plan to work against racism and protect vulnerable communities.

New markets began to crop up in Bloomington last summer after one vendor’s white nationalist beliefs were made public, and community members boycotted their presence.

A member of the People’s Market planning committee, Cara Caddoo, says the group wants to promote food justice–which means to provide healthy, local food to everyone in the community regardless of race or class.

Caddoo says the open letter to the Woolery Market is meant to create a dialogue and offer help. Many of its members have been working to promote food justice for the last year, and are ready to share their experience with other markets.

“We’re here to help and we really would like Woolery Market folks to take up that conversation with us and think about the ways they can implement these things using some of the experiences that we’ve had over the past market season.”

Susan Bright is the CFO of Nick’s English Hut and Osteria Rago in Bloomington. Osteria had a booth at the Woolery Market last weekend and plans to have a booth at the market until the end of season in October.

Bright wants the Woolery Market to make its intentions of community and safety clear. But many farmers are in the height of planting and summer harvest right now, so it may take them a few weeks to issue a statement or respond to the letter.

Bright doesn’t think a delayed response should be a knock on the Woolery Market.

"I’m thankful for what they’re putting out there, that’s great," Bright says. "If they can help support what the new market is trying if trying to get going, it would be helpful. But them too, they’re in the throes of the height of their market.”

Mandy Corry is the owner of Schacht Farms and is a vendor at both the People’s Market and Woolery Market.

She says in an emailed statement, “I believe that if Woolery Market is truly about food and community as their mission states, they must publicly stand against racism and take active steps to combat food insecurity. I believe it's the responsibility of vendors to not only encourage these steps from the board but to play a part in the solution. For me, this has been in the form of emails and phone calls to the board, asking about handicapped accessibility, bus line accessibility , the use of SNAP benefits, working collaboratively with area food agencies to donate product, and even offering to transport donated product. I've also asked that they consider vendors collectively signing an anti-racism pledge and making a public statement of their stand against racism and have even offered to serve as a liaison between the board and community on issues of food justice and racial justice. To date, none of my offers to help have been accepted, but I am hopeful that as this farmer-run board gets their feet under them, they will begin to take these steps."

The Woolery Market’s opening day was Saturday, July 11. Leadership with the Woolery Market did not accept an invitation for an interview by the date of this story’s publication.