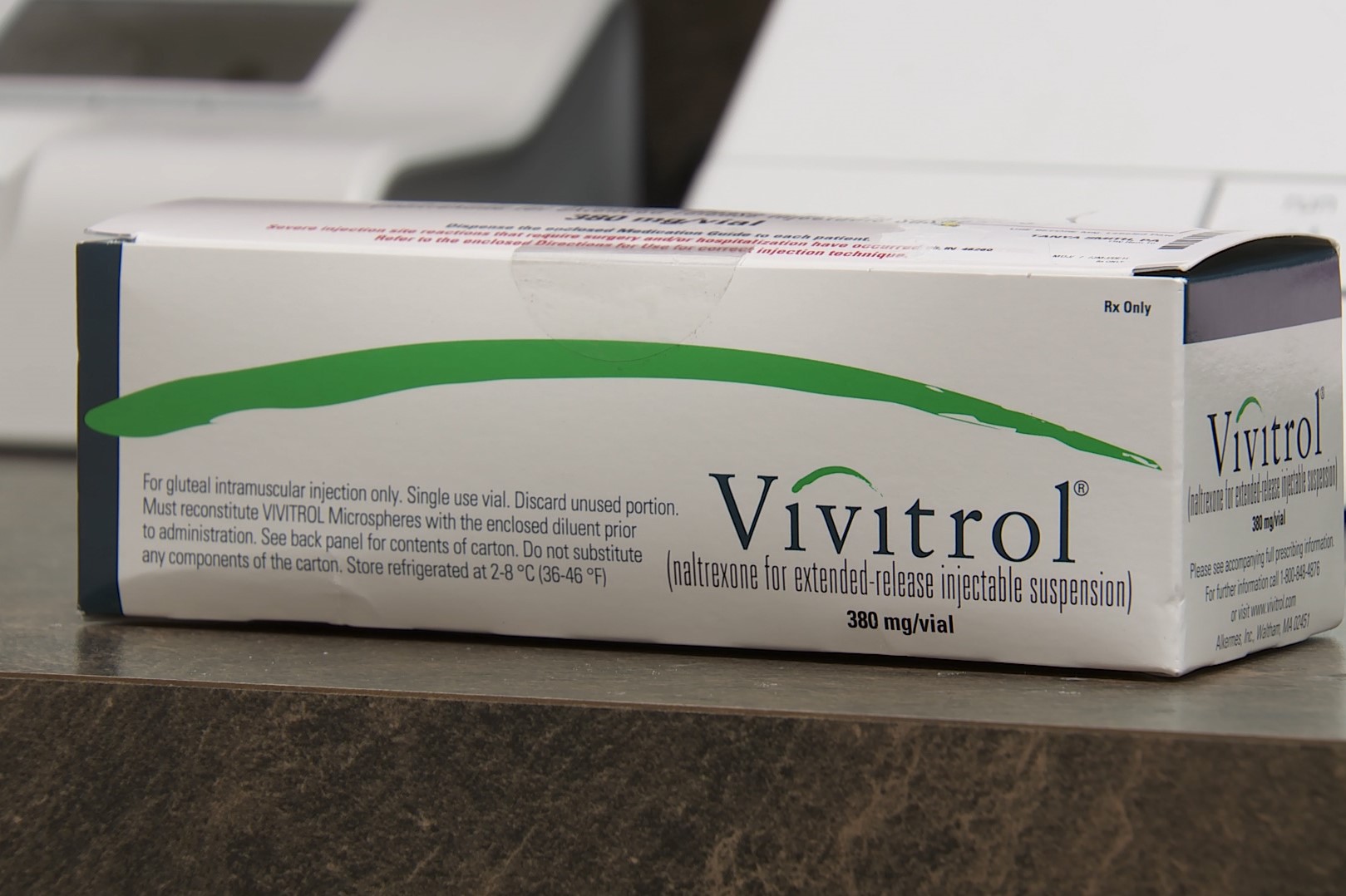 Vivitrol is a monthly shot that helps curb the desire for opioids. (Seth Tackett, WFIU/WTIU News)

Opioid drug abuse continues to plague the state, particularly with populations who are or have been incarcerated.

Nearly 20 percent of people sentenced to state prison or jail report regular opioid use according to the Substance Abuse and Mental health Administration.

This is dangerous because people’s tolerance to opioids goes down while they are incarcerated, says Tisha Wiley, chief of The Services Research Branch at the National Institute on Drug Abuse.

“So if they do go back to the community and seek out opioids, that makes them especially vulnerable to relapse," she says.

Because of these risks, jails are being pressed to provide treatment before people are released from custody. Some states like Washington, Rhode Island and Maine have passed legislation requiring treatment be available.

Just a few years ago, in Marion County, Indiana, the Corrections Department began running its own addiction recovery program, focusing on people who have committed felonies.

Jamie Dimartino of Indianapolis is one of the program's particpants. She struggled with heroin addiction for about 12 years.

She tried various methods to get clean.

But nothing stuck. She’d start using again, and eventually ended up in Marion County’s jail.

“I went to prison and was released on just regular probation, where I then failed multiple drug tests and violated my probation,” Dimartino says. “While I was in jail, they came and asked me if, screened me for the program and asked if I wanted to participate in it."

The program starts with a 2-week detox before starting clients on medically assisted treatment.

There are a few medications commonly used, like Suboxone and methadone. Marion County’s program uses one of the newer options, Vivitrol, which is a monthly shot that helps suppress the desire for opioids.

Dimartino says this made a difference for her because unlike other treatments, Vivitrol doesn’t need to be taken daily.

“I think the fact that it’s a shot,” she says. “Everything else you can just not take that day and then decide to go get high.”

“We specifically chose Vivitrol as the component for this program because of that extended time frame that the drug allows, that 28 days for the injection,” Williams says.

One shot costs up to $1,500. Dimartino says her insurance covered most of that.

People are screened for the program based on their motivation to participate and how likely they are to be a repeat offender. Participants convicted of a level 6 felony or higher who are addicted to opioids qualify for the program. It usually takes about a year to complete.

The program is funded by grant money from the state.

“The grant specifically states that we have to have people in the program that have moderate or higher risk to reoffend,” Williams says.

Once someone agrees to take part in the program, they don’t leave the Marion County jail until they’ve had their first injection of Vivitrol.

Then they enter what’s called ‘the intensive phase’ of the program.

“So we kind of know where they're going when they're out in the community, but don't have them on that restrictive, that they just have to stay at home if they're not going to probation or treatment,” Williams says.

Then they move on to a final phase, which is similar to regular probation.

Participants receive counseling and therapy during all three of the program’s phases.

There are indications the program is working. Judge Rogers, who oversees the program, says people come into his court and request to participate now.

Right now, 10 people are enrolled in the program.

But Williams and Rogers want more grant money so they can extend the treatment program to people who have committed minor offenses as well as felonies.

They say it’s people like Dimartino who inspire them to keep it going. She graduated from the program this spring.

Now, she works at a restaurant in Indianapolis and lives with her boyfriend and his daughter.

“A year from now, I would like to maybe look into buying a house. I've been able to save a lot of money. I'm about to get my license back and get a car, just be a normal person again.”

Now, she works at a restaurant in Indianapolis and lives with her boyfriend and his daughter.

*The wholesale acquisition cost of Vivitrol is $1,300 per month. The manufacturer, Alkermes, has patient support offerings, like copay savings and economic need-based patient assistance programs. Vivitrol is covered by Medicaid in all 50 states.