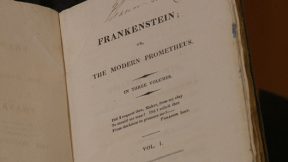 The Indiana University Lilly Library is celebrating the 200th anniversary of Mary Shelley's Frankenstein with an exhibit full of surprises.

For example, the library's first edition of the book is different than the green-skinned monster we know today.

Head of Public Services Rebecca Baumann says only 500 copies of the first edition were printed in the early 1800s. There are two in Indiana and one belongs to the Lilly Library.

But the cover page is missing something vital: the name of the author.

Baumann says that's not uncommon for the time period.

"Many 19th century novels were published anonymously, even more so when they were written by women," she says.

Baumann says other changes include the appearance of the monster. He changes from an attractive, long black-haired bookworm to the green-skinned bolted monster we know today.

And she says until the third edition, Frankenstein wasn't one novel, but three separate books. She says that made it more affordable.

"So if you split the novel in three you could have three people take it home at once, so it worked really well," Baumann says. "This is how Jane Austin's novels were published – a lot of the 19th century classics that we know and love, if you look at the first edition as a triple decker."

Since then the book has become required reading in a lot of high schools.

Baumann says with this year's 200th celebration of Frankenstein, Lilly Library wanted to join other educational leaders across the state to teach readers about the evolution of the book.

The exhibit includes copies of books that the character Victor Frakendstein reads in the novel.

"It kind of shows how this is a novel that's stitched together from all of the things that Mary read, the influences of her friends, her parents and all of that," Baumann says. "The other side of the gallery kind of takes – where do we go from Frankenstein? How did it inspire all of these other writers?"

The exhibit runs through December.