Lennie's Restaurant Moving Into The Roost-Finches Space On Kirkwood Ave. In July 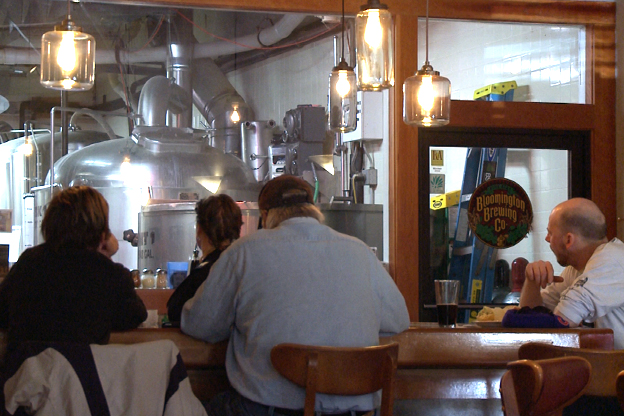 Lennie’s will close for about a week in July to open in its new space. (Joe Hren, WFIU/WTIU News)

Lennie’s restaurant and brewpub is moving to Kirkwood Avenue after 30 years on 10th Street near the Indiana University Bloomington campus.

Co-founder and CEO Jeff Mease says the restaurant will move into the spot formerly known as The Roost-Finch’s Brasserie  after IU announced plans to demolish and redevelop the Crosstown shopping center.

"We thought given the changes in the area that it wasn’t the best site for Lennie’s anymore because there’s going to be dramatically increased retail square footage and less parking," Mease says.

The Roost announced last week they would close after 13 years in the space on Kirkwood Ave. near the Sample Gates.

Half of Crosstown shopping center on 10th street has already been demolished as part of a multi-million dollar redevelopment project.

Mease says the company’s branch of Pizza X in the same shopping center will most likely move into the new building in the same location. Some of the brewery equipment visible in the current Lennie’s pub side will move to their west side brewing facility where they’ll be able to streamline brewing production.

“I think it’s going to be able to keep our connection with the IU campus tighter than anyplace else we could be,” he says.

Mease says they’ll be able to use the upstairs room at the new location for private parties and some chefs are already learning how to use the wood-fired brick oven, but the menu and overall Lennie’s experience will stay the same.

He says he wants to put a book and video together these last few months as a way for long time customers to say good-bye to the space.

"You can’t imagine the number of people that told me, oh we had our first date at Lennie’s, all that stuff," Mease says. Lennie’s will close for about a week in July to open in its new space.