Lawmakers Against Discrimination In Voucher Schools Holding Out For A Hearing 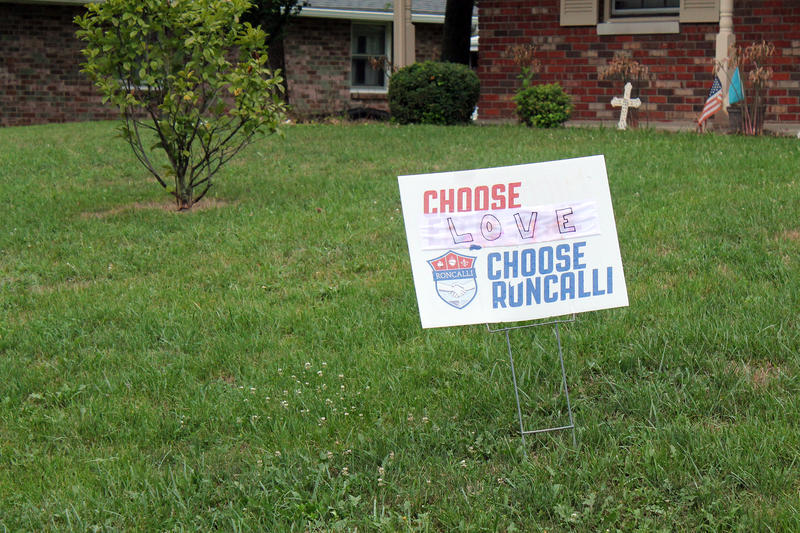 A sign from a house close to Roncalli High School protests the treatment of a guidance counselor. Shelly Fitzgerald's job has been threatened by the school over her marriage to a woman. (Lauren Chapman/IPB News)

Some lawmakers want to keep state money out of schools with openly discriminatory policies, in response to the ongoing controversy over Roncalli High School putting an employee on administrative leave because of her marriage to a woman.

But Sen. J.D. Ford (D-Indianapolis) says schools that discriminate against staff or students, should be blocked from those dollars. He says he wants to ensure the situation with Roncalli guidance counselor Shelly Fitzgerald doesn’t happen elsewhere.

“If this situation is happening to her, I think that’s one too many in our state,” he says.

Ford is the state’s first openly gay state senator, but he’s not the only lawmaker taking aim at discrimination in voucher schools.

Rep. Dan Forestal (D-Indianapolis), a Roncalli alumnus, says he’ll likely propose changes to an existing bill later on, in order to hear the measure in the House.

Both the House and Senate education committee chairs, Rep. Bob Behning (R-Indianapolis) and Sen. Jeff Raatz (R-Centerville) have said they’ll consider any bill assigned to them. But the two chairs have also not been clear if they will give legislation focused on discrimination in voucher schools a hearing.

Ford says he isn’t sure how far his bill to stop the practice could get, but it’s important to at least talk about it.

“I know there are folks who will disagree with me on this issue but at the end of the day, that’s what this body is for, is to have a place of conversation have a place of debate,” he says.

Fitzgerald has now been on leave since August, and filed a formal discrimination charge against the school and Archdiocese of Indianapolis earlier this week.