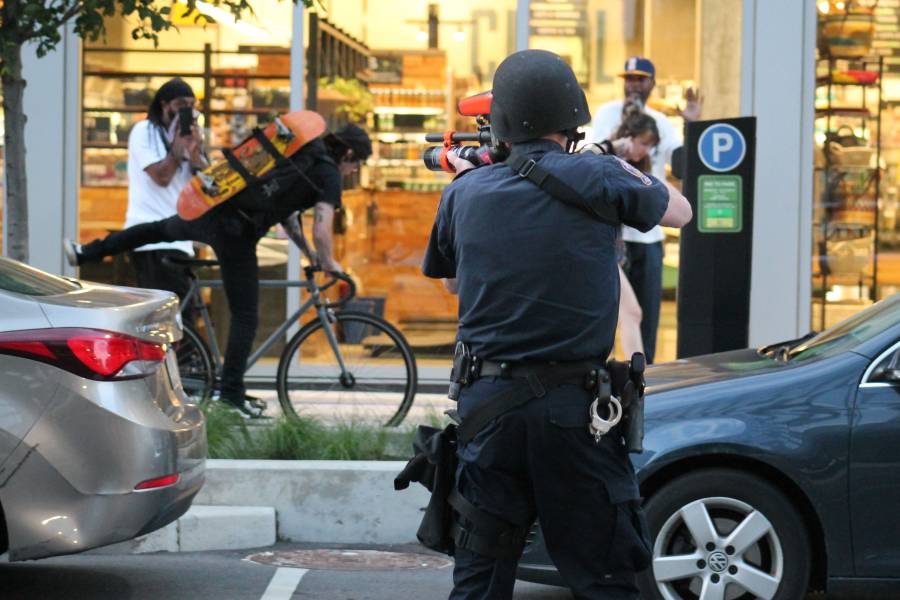 Authorities said three people in Indianapolis were shot Saturday night, including one fatally, during what they described as peaceful daytime protests over the death of George Floyd giving way to unrest and destruction later.

No details about the shootings were immediately released, but the Indianapolis Metropolitan Police Department said no officers were involved.

“There were several people down here who had no intention to protest. Their intention was to riot,” deputy police chief Joshua Barker said.

Protests became dangerous for a second straight night in Indianapolis as buildings were damaged, officers deployed tear gas and at least one business was briefly on fire. The Indianapolis Star reported at least six people were arrested after protesters made their way into the City County Building. Police said those arrests occurred shortly before officers deployed gas canisters in the area.

The shootings puncuated a chaotic series of events as IMPD officers and protestors clashed for the second consecutive night. The protests mirrored those in other cities across the country set off by anger over the death of a black man in police custody.

In downtown Indianapolis, windows were smashed, stores looted, tear gas filled the air and fires burned in streets. Police said they received so many report of shots fired that they lost count.

Around 1:20 a.m. Sunday, Mayor Joe Hogsett sent out a series of Tweets in which he called for an end to unrest and violence in the city.

"This afternoon, our city hosted a successful protest that allowed hundreds to lift up their cause and have their voices safely heard," he said. "Since it ended, a small group of people have chosen to diminish that activism through inexcusable violence. It is unacceptable, and it must stop."

Hogsett said his offce and the police department remain committed to discussing reforms that address "centuries of inequity" and ensuring the safety of peaceful protesters.

"And I would ask all who speak out in the days that follow to reject the tactics of those who would diminish a movement toward national action into unproductive destruction," he said.

The protests began peacefully late Saturday afternoon. Hundreds gathered across the downtown area, including Monument Circle and the Indiana War Memorial – where they filled the plaza facing Vermont Street.

Paul Napier brought his young son with him as he marched through the streets.

"I want him to grow up understanding these issues and hopefully by the time he's my age he won't be seeing this," says Napier.

"There is a lot of rage, and I can't understand what it's like to be black or the black experience," says Brown. "I'm here to support my friends and my community."

IMPD Deputy Chief Josh Barker says it's important to delineate between the violence and the peaceful protests at Monument Circle and the Indiana War Memorial.

"In the very beginning today we saw what we consider one of the most successful protests that Indianapolis has experienced," Barker says. "You had between 300 and 600 people that came down to peacefully gather."

Barker says IMPD worked with the organizers of those protests to set expectations and provided traffic control so the groups could move throughout the city.

But, Barker says, others were not there to protest.

"There were several people down here that had no intention to protest," Barker says." Their intention was to riot. And when they culminated in front of the City-County Building on Market Street, they made those intentions very well known."

A little before 9 p.m, a crowd gathered outside the City-County Building, and a window was broken as police watched from inside the building.

IMPD announced the gathering along Market street was an unlawful assembly and ordered everyone to leave. Around 9 p.m. police fired tear gas and some protesters threw objects at officers.

That clash touched off a second night of chaos.

Police cleared Market Street in front of the City-County Building, but the crowd lingered near the intersection of Market and Pennsylvania streets.

An unidentifed protestor was heard trying to direct the crowd, "Don't go over there, we got a whole system we're trying to take down."

Police continued to disperse protesters as they gathered down the block at Washington and Pennsylvania streets. They fired more tear gas into the crowd.

Earlier in the day, Indianapolis Mayor Joe Hogsett urged those particpating in the protest to dispurse between 7 and 8 p.m. But, protestors continued to march through the streets past the deadline. Around 8:30 p.m. one group appeared to fill two city blocks along Massachusetts Avenue. Some people eating at bars and restaurants in the area were seen leaving those places with drinks and joining the march. People who live downtown came outside to cheer them on.

During a press conference Saturday afternoon, Indianapolis Mayor Joe Hogsett said he met earlier in the day with Reed's mother and representatives of Indy Black Lives Matter. He said they requested that protestors who planned to gather Saturday night remain peaceful and disperse early in the evening.

Hogsett requested that people leave the downtown area by 7 p.m.

"After the peaceful protest is concluded, the safest thing people can do is return to their homes," he said.