Indiana Left It To County Courts To Release Prisoners During The COVID Crisis. Most Of Them Haven’t. 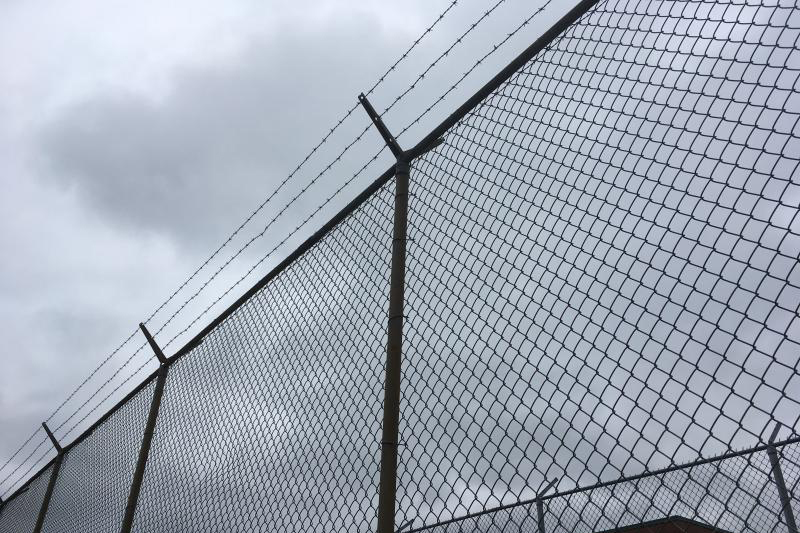 The number of COVID-19 sentence modifications amounts to just one tenth of 1% of the state’s total prison population of around 26,000 people. (Jake Harper/Side Effects Public Media)

Public health experts and advocates have worried about correctional facilities since the beginning of the pandemic. In such close quarters, social distancing is difficult or impossible, and a coronavirus outbreak poses risks to inmates, staff and the surrounding communities.

To mitigate those risks, some governors — including those in Indiana’s neighboring states — took steps to reduce the prison population, focused mainly on inmates convicted of low-level offenses near the end of their sentences, or those deemed vulnerable to COVID-19. In April, Kentucky Gov. Andy Beshear issued orders to release about 1,200 state inmates. Ohio Gov. Mike DeWine let out more than 100 people.

But Indiana Gov. Eric Holcomb has taken no such action, leaving it to local courts to decide whether inmates should be let out early or put on house arrest. Very few have done so — even as the number of COVID-19 cases in the prison system surged.

From March through May, just 27 inmates received COVID-related sentence modifications, according to data from the Indiana Department of Correction. That number accounts for just one tenth of 1% of the state’s total prison population of around 26,000 people.

“There are many more people in the department of correction who could be released,” says Amy Karozos, the state public defender. “That number is very low.”

The state public defender represents indigent clients appealing their convictions, but during the pandemic, Karozos decided to pursue sentence modifications to see if she could get clients out more quickly.

“What purpose does it serve to keep someone in for another couple months when their risk [of contracting COVID-19] is so high?” Karozos said. “You’ve got to weigh the costs and benefits.”

On March 27, the Indiana Public Defender Council wrote a letter to Holcomb, co-signed by Karozos. It argued that Holcomb should commute the sentences of thousands of inmates who were imprisoned for non-violent crimes before Indiana’s sentencing laws were eased in 2014. Had they been sentenced under current law, some would be out of prison already.

“Any time would be the right time to commute the sentences of these nonviolent inmates,” the letter reads, pointing out that governors in other states granted clemency following similar sentencing reforms. “But, in the time of a state of emergency, it is essential to release this class of inmates now.”

Holcomb, whose office declined to comment for this story, did not respond to the letter, and he has held fast through similar calls for executive action.

“I do not believe in releasing those low-level offenders,” Holcomb said in a news conference on April 13. “We have got our offenders in a safe place — we believe maybe even safer than just letting them out.

Since then, positive COVID-19 cases have grown to include more than 700 prisoners and 320 corrections staff, although testing has been limited. Twenty prisoners and two staff members have died during the pandemic.

A series of hurdles

Absent action from the governor, inmates struggle to get sentence modifications, which could mean a reduced prison sentence or transition to house arrest.

“We’ve been really encouraged by some of the response we’ve had from courts,” Karozos says. But Indiana law makes it difficult to get relief.

But that can be a big hurdle. On average, prisoners are less educated than the general public and more likely to have a learning disability.

And decisions to grant a modification rest with the judges and attorneys who put the prisoner away. In a case involving a plea agreement, the prosecutor must sign off.

“There are a lot of potential sentence modification cases that don’t make it to the courts because we can’t get the prosecutors to agree,” said Karozos.

If a case makes it to a hearing, the judge still has to approve it. Corrections data, which are based on mentions of "COVID-19" in sentencing orders, show that few have made it through this gauntlet amid the public health crisis.

“We have not released enough. This is not an effective way to try and reduce the prison population,” said Karozos. “If someone is not a threat, why shouldn’t they be able to serve the rest of their sentence at home?”

Starke County Judge Kim Hall struggled years ago with the same statute Karozos battles now. Prisoners who petitioned his court for sentence modifications were often cut off by prosecutors, who have final say when convictions are based on plea agreements.

“That’s the end of it at that point. The judge doesn’t even have authority to do it,” he says, “I found that to be inconsistent with evidence-based practices.”

Hall found a way to override the prosecutors. Plea agreements must be approved by a judge, so for low-level offenses, Hall refused to accept an agreement unless it contained a clause allowing the court to modify the sentence at any time.

“I need to have the legal authority to at least hold a hearing,” he said.

That clause helped him move quickly when the pandemic hit. Hall realized in March that the coronavirus could be devastating in the confined quarters of jails and prisons.

“An awful lot of people are confined because of my sentencing orders,” he said. “It was urgent to identify who could safely be released, and then get them out as soon as possible.”

Hall and his staff identified a handful of inmates who had been convicted of non-violent crimes and were close to their release date. In late March, one of the men on Hall’s list left prison — the first in the whole state.

But he gave up on releasing the rest after a corrections official told him that because of corrections procedures, it would take a couple weeks before anyone else could leave.

“In my judgment the emergency trumped that protocol, and people needed to get out before they got infected,” Hall said. “Therein lies the problem.”

Starke County had very few coronavirus cases at the time, and in two weeks, he didn’t know if the inmates could have contracted the virus and brought it into the community.

“Our numbers were so low, I just didn’t want to do anything to jeopardize that,” he said.

Since then, corrections data show that the process has been faster. Most of the released prisoners got out within a few days.

Indiana received a failing grade for its response to the coronavirus in prisons and jails, according to an analysis from the Prison Policy Initiative. Most other states failed, too.

But Indiana ranked especially low among states in a key metric: how much the state reduced its prison population.

Between March and June, Indiana’s prison population dropped from 26,891 to 25,876 — a reduction of 3.8%. But that doesn’t necessarily reflect an intentional effort to depopulate: The coronavirus has hobbled courts, and while inmates are still released when their sentences end, fewer people are entering prisons.

Lauren-Brooke Eisen, a director at the Brennan Center for Justice in New York, said the number of people released from Indiana prisons is “exceptionally low.” States — and governors in particular — need to do more to reduce prison populations, she added.

“These are people who are very vulnerable and very likely to not only get sick, but many of them will die of COVID,” she said. “That just doesn’t need to be the case.”

In April, Holcomb encouraged county officials to take steps to reduce their county jail populations, and those efforts seem to have been successful. From early March to mid-May, 91 of Indiana’s 92 counties reported an overall 27% reduction in the jail populations. Some jails had cut their populations in half, although the total has risen slightly since then.

Bernice Corley, executive director of the Indiana Public Defender Council, said it’s likely that law enforcement officers have been bringing fewer people into jail, and that courts have been allowing more people to await trial from home instead of behind bars. But it’s unclear precisely what methods counties are using to reduce their jail populations.

“Data is not being collected. It’s frustrating,” she said. “We don’t know how to maintain this good result.”

State Rep. Cherrish Pryor, D-Indianapolis, found it odd that Holcomb encouraged local officials to depopulate jails, in light of his refusal to issue an order to reduce the state’s prison population.

“He’s telling locals to do something that he’s not doing,” she said.

Pryor, a member of the Indiana Black Legislative Caucus, has twice written to Holcomb urging him to release non-violent offenders with 60 days or fewer remaining on their sentences. She also highlighted the disproportionate number of Black inmates, and that the coronavirus has hit African Americans especially hard.

“Our state has not paid attention, given much assistance to them and that is unfortunate,” she said.

In response to the pandemic, a health disparities task force was assembled at the urging of the caucus. Members included representatives from the Indiana State Department of Health and the corrections department’s chief medical officer, Dr. Kristen Dauss.

They, too, found that reducing the prison population is a key component of addressing the COVID-19 epidemic.

This story was produced by Side Effects Public Media, a news collaborative covering public health. Jake Harper can be reached at jharper@wfyi.org. He's on Twitter @jkhrpr.