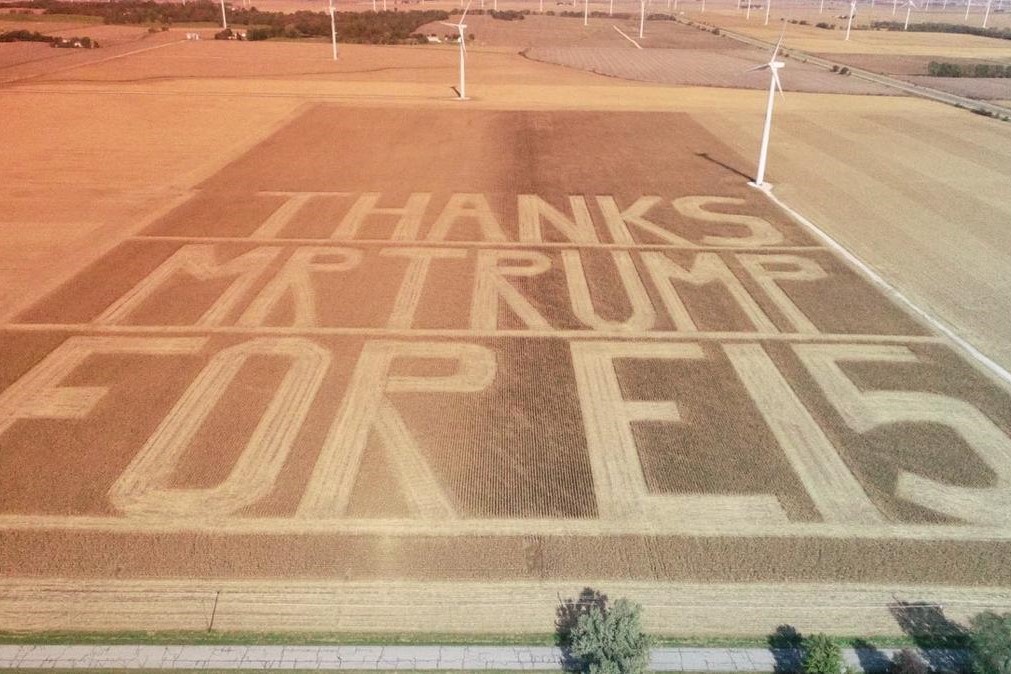 One Indiana farmer found a special way to thank President Donald Trump after he announced earlier this month E15, gasoline blended with ethanol, will be sold year-round.

Benton County corn farmer Bruce Buchanan farms about 6,000 acres with his son and recently drew national attention when he got some help and carved the message “Thanks Mr. Trump For E15” into his field.

He and few others came up with the idea over a cup of coffee, but Buchanan says it went beyond what they imagined.

“This has a mind of its own,” says Buchanan. “I have never dreamed that we would get the response from this that we had.”

Farmers and those in the E15 industry cheer the effort. Buchanan says expanding E15 sales year-round will not only help farmers and E15 producers, but also consumers – giving them a cheaper fuel option at the pump.

But Purdue University agricultural economist Wally Tyner says while it might be seen as an affordable fuel option, it might not be cost efficient.

“Even though the price of E15 is lower at the pump, it has to be at least 5-cents a gallon lower in order to break even because alcohol-ethanol has lower energy than gasoline, which means it gets less miles per gallon,” he says.

Tyner says there might be some sales increases, but not as much as some claim.

“I think E15 is going to be very slow to take off. The majors in all likelihood are not gonna to do it,” says Tyner. “I mean why would Exxon or another major advance E15 which just takes away 5-percent of their market share away.”

Buchanan says every little bit he can sell helps.

“We have the ability to help feed the world, but by the same token it starts at home,” he says.

E15 is currently sold in almost 30 states, including Indiana. Regulations previously prohibited sales of E15 from June to mid-September throughout most of the country.