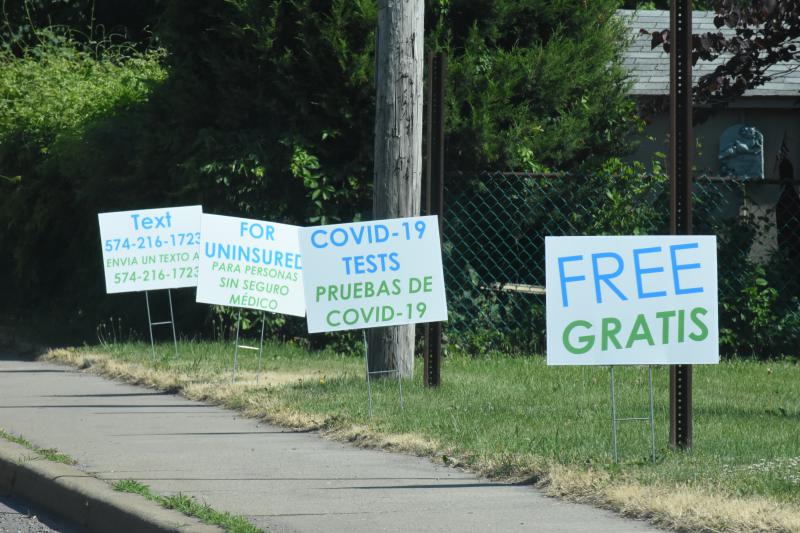 Signs in English and Spanish near a COVID-19 testing site in Goshen, Indiana. (JUSTIN HICKS/IPB NEWS)

On a Friday evening in late June, Liliana Quintero received a call from one of the Spanish interpreters working at a COVID-19 testing site in Goshen, Indiana. The area has one of Indiana’s higher Latinx populations and higher rates of COVID-19 cases, according to state data.

“[He was] saying, ‘Liliana I need to inform you that the nurse who is in charge of this site just told me that each time that she sees Hispanics coming to this site, she's going to call the police,’” recalls Quintero, director of the Northern Indiana Hispanic Health Coalition, an Elkhart-based health education and advocacy nonprofit.

That sort of racial profiling upset Quintero and was a serious threat to local residents.  Local and state health officials quickly shut down the testing site and within days replaced it with one managed by the state.

Optum, the state contractor that provided testing, apologized to the Goshen community. In an emailed statement, Optum said it “ended our relationship with this person upon learning of their behavior, which was totally inconsistent with our values.”

“We take seriously our responsibility to provide compassionate, quality care to all members of the communities we are privileged to serve, and we are committed to treating every person seeking testing for COVID-19 with respect,” Optum said in its statement.

Quintero says the incident could have undermined her organization’s work to build their clients’ trust in the local government.

"We cannot be always there acting as a bridge," she says. “That was the beginning of a lot of huge learning experiences for everybody.”

The profiling incident is also part of a larger problem. Months into Indiana’s fight against COVID-19, some community health leaders say testing efforts don't always consider the Hoosiers they serve. That includes Black and Latinx Hoosiers, as well as undocumented immigrants and refugees.

“In general, they're afraid of any government,” says Margarita Hart, executive director for Esperanza Ministries, a nonprofit that provides health education and services to undocumented immigrants in the Indianapolis area. “And in a pandemic, they're not going to go and get the help because they're too afraid.”

Hart is also executive director of the Indiana Community Health Workers Association. She says more than 2,000 community health workers across the state have spent years building trust in these communities.

But that trust doesn’t always extend to public health and medical institutions. Hart says the state should have reached out to more community health workers and organizations in building its pandemic response.

“I think if we would have been invited to the table so that we could enlighten them with some background that would have been great,” she says. “You're taking an asset and ignoring it. It's like hammering a nail with a rock instead of the hammer that you already have in your toolbox.”

In an emailed response to written questions from Side Effects, the state department of health said it has “worked extensively with representatives of Indiana’s minority communities and other partners around the state to build awareness of the need for testing and resources that are available.”

The state also said that testing site employees do not ask any questions about citizenship or immigration status. “Our priority is ensuring that individuals who may have COVID-19 are able to get tested so they can isolate and close contacts can be identified to quarantine and reduce the spread of illness.”

But Hart says stories like the one in Goshen spread quickly on social media in undocumented communities. She isn't willing to tell the families she works with that they will be safe from immigration if they go to a testing site, because that could undermine her credibility.

She adds, “It takes one nurse, one individual, one person in that testing site to simply call the police for them to then turn around and say, ‘But Margarita, you said no one was going to come after us.’”

Community health leaders say the state’s COVID response has been more successful with local input. One example is a state study on how the virus spreads. In partnership with Indiana University-Purdue University Indianapolis’ Fairbanks School of Public Health, the study initially recruited participants by sending out postcards with instructions on how to make an appointment for a COVID-19 test.

The state said in an email that the postcards were sent in English, with additional instructions sent in Spanish or Burmese for participants who responded with their preferred language.

“We knew immediately that people of color would not respond to those postcards,” says Sharon Tubbs, director of Health Visions Midwest, a health education organization in Fort Wayne, another area with higher Black and Latinx populations and higher rates of COVID cases.

The state asked Health Visions Midwest and other local organizations about the best location for a testing site as part of its study. Tubbs appreciated that the state wanted to include people of color in their research, and that they wanted to partner with trusted community organizations.

"When you get organizations that serve people of color, then they can lend credibility to what you're doing,” Tubbs says. “They can legitimize it.”

The problem was that the state only wanted to test the small group who responded to its postcards, not the community at large. Because of the history of mistrust of government and research, Tubbs didn’t think members of the Black, Latinx and refugee communities in Fort Wayne would participate in the study. So she pushed for a more meaningful project with the state.

"We felt that we needed some more collaboration, collaboration on the front end,” Tubbs says. “We did not feel confident at all that they would get the turnout that they had hoped for.”

In a letter to the state, Health Visions Midwest said they would not facilitate a testing site for the study unless the state offered testing to everyone.

“Historically, researchers have come into African American communities to do research, write their papers, and present at conferences—but have left no benefits for the communities that they researched,” the organization’s letter stated. “This again seems to be the intent.”

The state agreed to an additional testing site, and Tubbs said more than 300 people were tested there in one day. Health Visions Midwest also provided Spanish interpreters and interpreters for Burmese refugees, which they hoped would draw in more people to be tested.

“If you have them show up and they don't understand or if they're not feeling comfortable, if they don't see someone who looks like them, then you may have wasted your time,” Tubbs says.

The state also said in an email that proof of Indiana residence is not required to receive a COVID-19 test. But Quintero says their clients have been asked for IDs at local testing sites, where the nonprofit provides interpreters.

She says that adds stress for residents who might not have an ID, or whose documents are out of date because consulates like the one in Chicago suspended services at the start of the pandemic.

Some site workers also reportedly took pictures of IDs to correctly spell the name of the person getting tested, but Quintero asked the local health department to stop that practice.

“[It] is to kind of make them think twice, ‘Should I go to a test or no, even though I have all the symptoms,’" Quintero says.

Quintero also advocated for testing on days and during hours that were better for factory workers in the Elkhart area. That was helpful for the many workers who are undocumented immigrants – and a far cry from the earlier racial profiling incident.

The state says drive-through testing clinics in Allen County, where Fort Wayne is located, and other hard-hit Indiana counties are examples of successfully reaching Hispanic and Burmese populations.

“Our goal is to always partner with the local health department to identify testing locations, but we also reach out to other partners to ensure clinics can be set up in the most accessible and appropriate locations quickly,” the state said in an email.

Community leaders like Hart and Quintero say they would not want the state’s task of stopping the spread of a deadly virus. They hope the state continues efforts to build trust in the communities hardest hit by the virus.

Quintero says, "It's an eye-opener and hopefully that is going to be helping everybody to be a little more caring, more empathetic about the reality of what we face.”

This story was produced by Side Effects Public Media, a news collaborative covering public health.