Car Speeds Into Protesters At Rally Against Racism In Bloomington

By George Hale and Ethan Burks 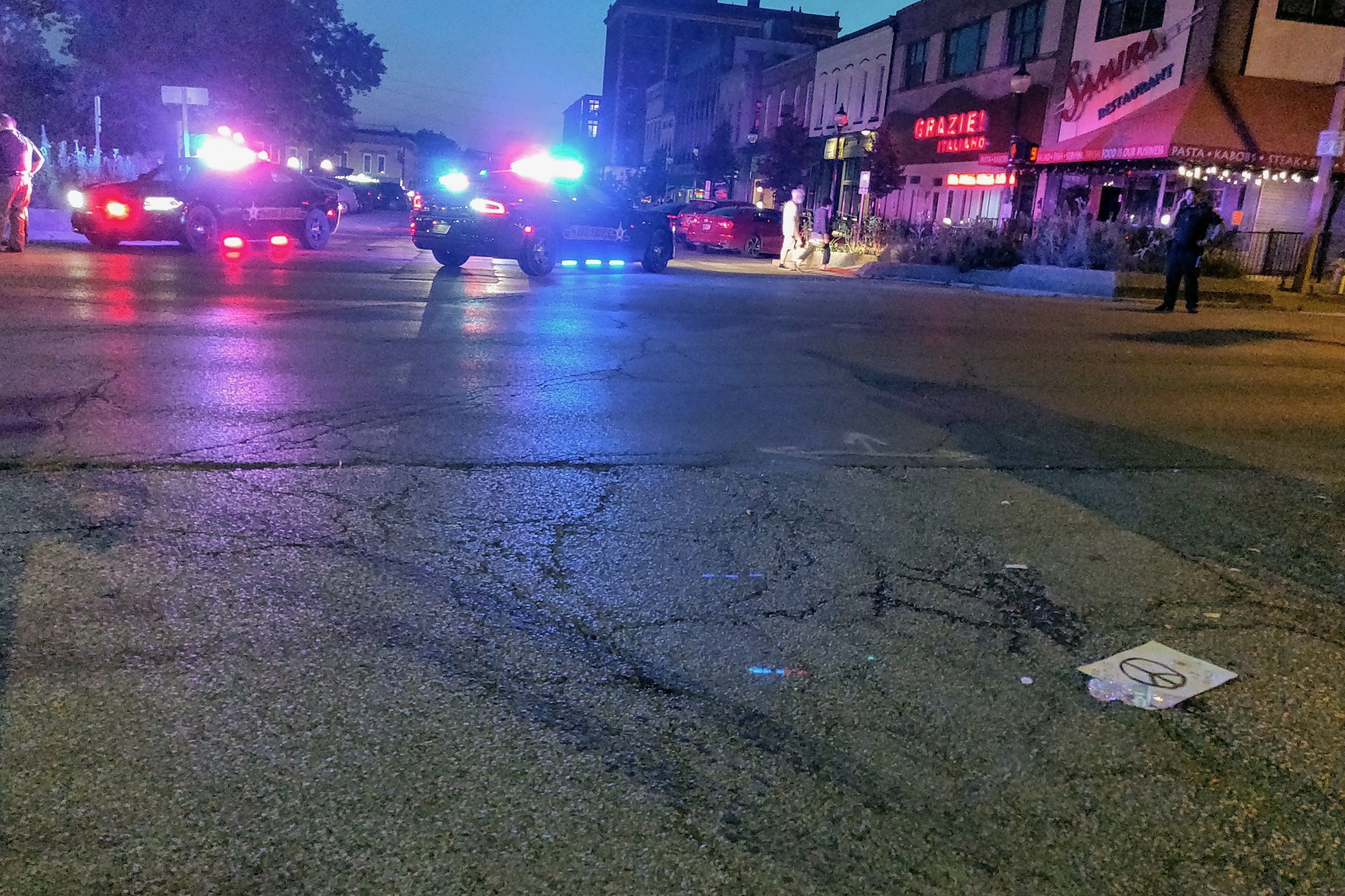 Sheriff's deputies survey the aftermath of a hit-and-run that injured at least one person at a rally against racism in downtown Bloomington.  (George Hale, WFIU/WTIU News)

At least one person was hospitalized late Monday after a car sped into protesters at a demonstration in Bloomington’s courthouse square.

Witnesses and protest organizers said a driver intentionally accelerated their car through a group of demonstrators on Walnut Street between Kirkwood & 6th.

They said two individuals were hit by the red Toyota Camry, and one was taken to the hospital.

“We were expecting potentially people that might be bad actors to show up,” said Caleb Poer, who witnessed the hit-and-run. “I had just given a speech and I was just walking back to find my people and I just heard tires screech.”

Poer, a rising junior at Indiana University, said he saw two people on top of a red car driving north on Walnut. “So, I took off running after (the car) and they swung hard, and one of the girls falls off,” he said. “I don’t know what happened to the other person.”

Before the driver on Walnut sped up, a volunteer security team had been blocking off intersections as protesters crossed the streets.

Poer said that during last month’s protests, a car ran over a demonstrator’s foot, and organizers were hoping to avoid similar injuries.

The driver managed to flee the scene but organizer Patrick Ford said protesters were able to record their license plate number. They provided it to law enforcement, he said.

The Bloomington Police Dept. is still searching for the vehicle, officials said.

"At this time, the vehicle involved has not been located and investigators are working to determine the identity of the man and woman inside the passenger car and their whereabouts," the department said in an emailed statement.

It said another person grabbed onto the car, and the two "remained on the vehicle until the vehicle reached the intersection of Walnut Street and 6th Street, where the vehicle quickly turned eastbound on 6th Street. This turn caused both the man and the woman to fall off the vehicle."

The police said that the 35-year-old suffered abrasions to his arms. The 29-year-old suffered a laceration to her head and was reported to have lost consciousness. "She was transported to the hospital by ambulance for treatment of her injuries," it said.

A video uploaded to Twitter appears to show a passenger in the vehicle step out to remove an object from the road. The passenger gets back in before the driver speeds forward despite at least one person on top of the hood and another to the side.

Earlier, several hundred demonstrators gathered on the courthouse lawn to rally against racism and show solidarity with a Black man who says he was attacked by a group of White people over the weekend at Lake Monroe.

Bloomington resident Vauhxx Booker, who is Black, says several White men attacked him and shouted racial epithets during an outing near Lake Monroe.

“I was attacked by five white men, who literally threatened to lynch me in front of numerous witnesses,” Booker said Monday, before the demonstration.

Indiana’s Department of Natural Resources said it was investigating the assault.

“The incident is under investigation and the final report will be forwarded to the Monroe County prosecutor’s office upon completion,” Capt. Jet Quillen of the DNR said Monday.

The Monroe County prosecutor's office said it was awaiting materials from the DNR.

"They are actively and thoroughly investigating,” prosecutor Erika Oliphant said. “Once my office has received the completed investigation and all associated media, we will review those materials and make charging decisions.”

State Senator Mark Stoops (D-Bloomington) says he was horrified to hear about the racist attack and says it should be treated as a hate crime.

“I call on Governor Holcomb to immediately suspend the DNR officers involved pending further investigation," Stoops said in a statement.

Booker’s lawyer said the DNR “will be forced to answer some tough questions.”

“Based upon my experience, arrest warrants will be issued,” Katharine Liell said.