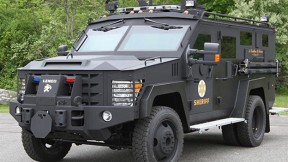 The Bloomington Police Department says an armored vehicle is coming to the city this summer, but many residents aren't happy about it.

At a public meeting Tuesday, officials announced the vehicle will be used to protect officers and civilians against powerful firearms like AK-15's and AK-47's. Heavy metal plating makes the vehicle bulletproof.

Dozens of community members attended the meeting and say they're concerned the police department could become more militant.

The Critical Incident Response Team will be the only group that operates the vehicle. But Police Chief Mike Diekhoff reassures residents the vehicle won't be used during protests.

"I know there's a lot of distrust of police, but I can never see an incident where we have a protest downtown where we're going to roll this vehicle out to use it," Diekhoff says. "It doesn't – it won't rise to the level of following our policies and following the matrix to deploy our CIRT team."

"I find it disappointing that we waited so long to actually have this dialogue," Booker says. "Bloomington's a progressive town, so you would think it would give our elected officials some type of hesitancy before they authorized an armored vehicle."

Resident Steve Scott supports the department's decision to purchase the vehicle. He says he has worked as an actor in police simulations in the past.

"Having worked with these guys I can be pretty confident they're not going to use it irresponsibly," Scott says. "People need to understand that Bloomington Police Department is extremely well trained and highly professional, and I've seen that first hand."

This isn't the department's first armored vehicle. Authorities had access to another one for about 12 years before it was retired in 2012.

Diekhoff says the contract they have with manufacturer Lenco does not include any weapons. He says if they want to add attachments, the mayor and City Council must first approve it.

"So those are types of things that they will have to also watch, but I can tell you that there's not need to arm that vehicle," Diekhoff says.

The vehicle costs about $250,000. The funds will come from the Public Safety Local Income Tax.