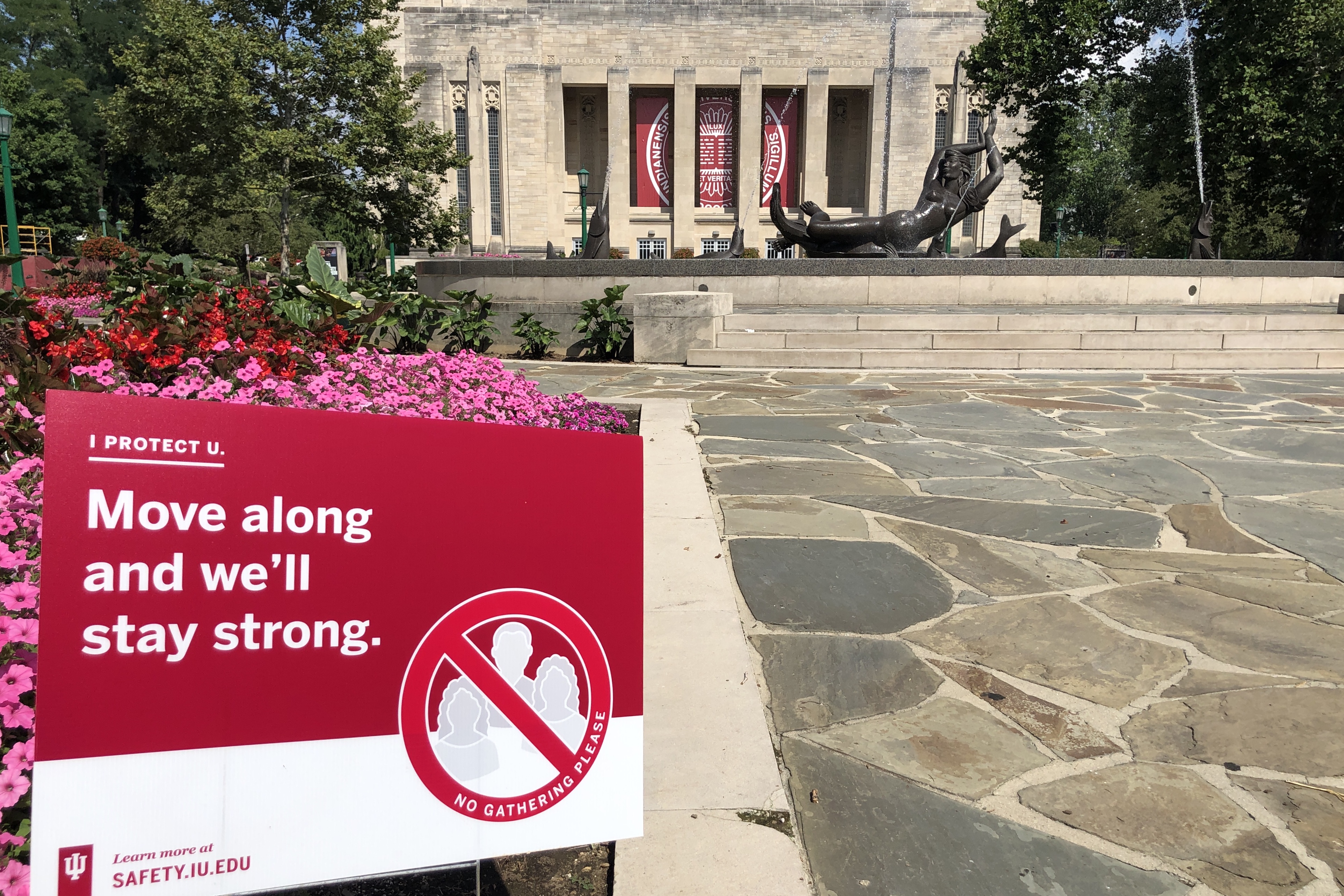 While the state's unenforced mask mandate remains in effect, other restrictions are being rolled back. (Brock Turner, WFIU/WTIU News)

“We have proven effectively—whether it be at schools or businesses—that you can operate safely and manage your interaction,” Holcomb said.

Now, bars, nightclubs, and gyms may operate at full capacity. The caveat, according the state, is social distancing must remain in place.

Yet there is little way to enforce those measures. Holcomb and state health officials have called on local health departments to enforce social distancing and mask wearing. Departments say it is impossible to adequately police every establishment.

“That is particularly challenging,” Dr. Sean Sharma, the Health Officer for the Fountain and Warren County Health Department said. “But it doesn’t mean we shouldn’t try. Enforcement needs to be supportive, educational, and there needs to be signage, there needs to be reminders.”

“When you have repeated egregious violators of recommendations than they need to be asked to leave,” he said. “Whether that is in a nightclub, or whether that’s at a high school volleyball game.”

Sharma joins a number of local health officials sounding alarms that Indiana is re-opening too quickly. Marion County, the state’s most populous, announced Thursday it would not be moving ahead.

Many health officials are specifically concerned about the opening of bars and nightclubs. Sharma said there’s a consensus among health officials that much of the coronavirus's spread is related to places where gatherings take place.

“A lot of them have been tied to social gatherings, restaurants, bar bars, nightclubs, or even just, you know, backyard barbecues,” he said. “Those things, we need to have caution about, we need to be smart about.”

The story is the same in Henry County.

“In our county, a lot of the spread are those close family or small group parties,” Angela Cox, the Henry County Health Department Administrator said. “That’s exactly what happens in a nightclub or a bar that doesn’t in a restaurant where people kind of pack in just to socialize.”

Despite those concerns, the governor insists his administration is following data. While Indiana’s overall statewide positivity rate has declined, much of that can be attributed to the influx of tests required by colleges and universities to incoming students, according to Indiana University’s Assistant Director of Public and Environmental Health, Graham McKeen.

“A lot of that has to do with large amounts of asymptomatic testing in universities like we’re doing at IU,” he said. “You want to be below five percent. We are, and that’s great and all, but I still don’t feel like we’re at a true level of containment for the virus, and that’s really no reason to stop.”

He and other health officials worry about how the public will perceive a lessening of restrictions.

“It just might give some of that wrong mindset or behavior change,” McKeen said. “We really don’t want to let up right now. Now’s not the time to let up off the gas.”

McKeen admits he was “a little bit shocked” and “a little dismayed” by Holcomb’s decision.

In a statement, Holcomb’s office said the state looked at the seven day positivity rate and stable ICU bed and ventilator counts to make the decision.

They also praised daily testing averages near 15,000 as a metric that lead to re-opening. However, Indiana still finds itself falling well short of recommended testing guidelines.

Decision Takes Place Weeks Before Election In A Tightening Race

Adding further confusion to the timing of Holcomb’s decision is the incumbent’s place in a tightening race for Indiana Governor.

Many believe the timing of this decision stems from eroding support among his conservative base. Holcomb is up for re-election. A recent poll shows some voters switching to Donald Rainwater, a Libertarian candidate who opposes the statewide mask mandate.

Many Republicans have opposed science-backed mitigation strategies such as mask mandates and mandatory closures. Angela Cox is the Administrator at the Henry County Health Department. She says partisan agendas have influenced the pandemic response all along.

“Politics has had something to do with the pandemic, from the very beginning, and I think politics will have a part to play until the last minute of it,” she said.

Holcomb’s office was not immediately available for an interview, but denied, in a statement, that his reelection bid had any role in the decision.

Kyle Hupfer, Chairman of the Indiana GOP, admitted he was aware of the polls, but insisted the campaign reacts to policy decisions, rather than informing them.

“The governor and his team are making decisions, and then we are campaigning around it,” Hupfer said. “Those two lines really don’t cross. He’s doing what he needs to do to run the state.”