Indiana policymakers are focusing a lot of their attention lately on the different diploma options offered to Hoosier high school students. After the original draft for new choices came down from a committee of educators and business leaders, members of the public had a lot to say about the proposed changes – so much so that the State Board of Education decided to send them back to the drawing board. Over the last two weeks, we’ve taken a deep dive into some of the ideas that have been brought forth, why they are so controversial and what they mean for preparing Indiana’s students to be college- and career-ready. Check out our previous stories on arts and math requirements and whether we’re putting kids on academic tracks too early. 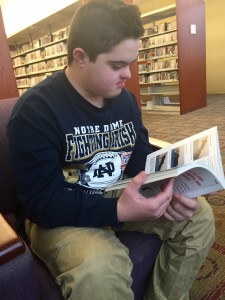 The rewrite of the state’s graduation requirements is making the path to getting a diploma more rigorous. These changes include more math credits, different elective requirements and a push to get kids considering jobs or academic interests they’re drawn to. The diplomas will apply to all students, but open up the possibility that as we raise the bar we could leave behind some of Indiana’s learners.

Take for example, Nash Huffman, a freshman at Noblesville High School. Nash has Down syndrome, and therefore an individualized education plan since he’s entered school. This means splitting his time between a general education classroom and working individually with a special education teacher. It also means his coursework could look different from other students’. But according to his mom, Jan, that’s different now that he’s a freshman.

“Once we get to high school you can’t modify the work,” she says. “You can accommodate the work, which is very different.”

This new challenge is manifesting itself in his math and science classes, where he’s struggling the most. After school one day, Nash and his parents meet me at the public library to talk. He’s already had a full day and is pretty tired, and has to go home to a math tutor after our meeting. It takes a little prodding from Jan and I to get him to talk about what he’s struggling with at school.

“Why is it driving you crazy?” I ask.

“I don’t know, it’s kind of complicated I think.”

When It Comes To a Diploma, Special Education Students Have The Same Rules

In Indiana, Nash must meet the same state standards as other students, and more importantly, must meet the same graduation requirements if he wants a diploma. He’s currently working toward earning the General Diploma, which requires four math credits, including Algebra 1.

Nash’s dad, Jeff, says his son isn’t ready to take that class so he’s in another, remedial math class to help prepare him for Algebra.

“He’s got a math test tomorrow, pre-algebra, and he’s working hard on it, but he doesn’t get any credit for it,” Jeff says.

He doesn’t get credit because it’s not an approved math course to graduate. The Huffmans are a little concerned about whether Nash can complete the four math credits he needs over four years. But if Nash were trying to get a diploma in a few years, when new diploma requirements go into affect, that could require three to four years of math. Jeff knows it would likely prevent his son from graduating.

“For a lot of folks with developmental and intellectual disabilities that math comes but it comes at a much slower pace,” Jeff says. “And to say you have to take math at this accelerated pace you fail one class all of a sudden you’re not going to get a diploma or you’re going to have to double up.”

But Jason Bearce, Associate Commissioner for Higher Education who helped write the new grad requirements, says they did consult special education experts about how this population of students could meet new requirements.

“So some of the experts that we talked to think that the vast majority of the special education population could earn these diplomas the same as they could today,” Bearce says.

One part of the new diploma Bearce says will be especially beneficial for these students is the requirement to get workforce experience or technical training.

“We would argue that to the extent possible, if we can equip students, whether they’re special education or not, if we can equip them with some very practical employability skills but also give them an opportunity to experience a workplace that they may be well suited for early on, that might increase the likelihood that they’re going to be able to find meaningful employment in an industry,” Bearce says.

In Indiana, the only other option for a student that can’t meet the graduation requirements is a certificate of completion. It’s not the same as a diploma, and many parents say they want their child to have the opportunity to apply for jobs with a diploma.

Bearce says during this re-write of graduate requirements he’d like to see the certificate of completion carry more weight, that way students that have to use it to graduate leave high school with the right set of skills and knowledge to enter the workforce or school.

Not every state makes its special education students follow the same graduation guidelines as general ed students. In some states, Nash’s remedial math classes would count toward a math credit rather than just preparing him for one that actually counts.

The Huffmans want options which give these students more opportunities.

“We’ve never sat here and said that Nash is absolutely positively some kind of wonder kid with Down Syndrome, that he’s going to be able to earn that high school diploma,” Jeff said. “But what we’ve always fought for is for him to have the opportunity to try.”

And right now, even though he’s not sure where he wants to work, he’s positive he wants to be able to live alone in an apartment, preferably with a girlfriend and his two dogs.