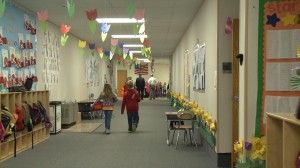 Eastern Howard Schools and others across the state have spent time and money rolling out the Common Core. Now they'll have to switch to similar — but state-specific — academic standards.

Teachers are facing a quick turnaround as they work to align their classes to the new academic standards the State Board approved Monday.

Though the standards aren’t dramatically different from the Common Core, educators say implementing them in just four months will be a challenge.

“Well, we’re fortunate we have 30 minutes of professional development every day before school starts,” says Eastern Howard Superintendent Tracy Caddell. “So we’ll be able to adapt, but there will be quite a few schools out there who don’t have the luxury of daily professional development, so I think it’s gonna be a struggle to implement them for the next school year.”

Monday’s vote ended a year of uncertainty for Indiana teachers.

Elsewhere in Greentown, Tami Maurer works with her kindergartners at Eastern Elementary. Maurer, who has been teaching here for 12 years, says the Common Core raised the bar for her young students — they learn how to write entire sentences and do basic math.

She says she tries to stay out of politics and focus on her kids. But she feels like she was forced into the fight over academic standards. For a year now, the Common Core’s fate has been in limbo. The nationally-crafted standards were out, but teachers didn’t know what they would be expected to teach next.

Turns out, the new standards aren’t substantially different than the Common Core.

“Just some language issues as far as grammar expectations for kindergarten — and that is really the only standards I was looking at,” says Maurer. “So just different tweaks that we would need to make with our report card.”

“One thing I did like that I saw that they’re doing with these standards is they’re lining them up so that I can see what a kindergarten student’s standards are and I can see how it’s sequential with all the other standards for first grade, second grade, and on up the line,” says Maurer. “So I can see expectations for all grade levels. That’s something that I did like on the layout of this one.”

Still, opponents of the Common Core aren’t satisfied. They call the new standards a sham, just a rebranding of the nationally-crafted standards they fought. And they cheered loudly at the State Board meeting as Andrea Neal cast the only dissenting vote.

The rest of the State Board voted in favor of the new standards, including state superintendent Glenda Ritz. Ritz has defended her department’s work to create Indiana-specific expectations. Now, she says, it’s time to focus on supporting schools as they make the transition.

“So we’ll begin getting information out to them early this summer, and they’ve already got the standards, they’re already looking at things,” she says. “Teachers will go home and start to think about lessons that will align with them.”

State education officials still have to put together resources for teachers. And while the new standards are similar, they’re not the same — and that has Superintendent Caddell afraid the differences will make it hard to compare his students to kids in other states.

“I know one of the concerns in speaking with other superintendents is AP and SAT scores, and those sorts of things, particularly SAT,” says Caddell. “They’re gonna be written, it’s my understanding, around the Common Core, and so I have a concern that our kids may not do as well on SAT’s in the future as they have.”

Indiana’s new standards were designed to prepare students for jobs and college. And that should translate to success on national tests such as the SAT.

But Caddell questions whether the debate up to this point was even necessary. His district and others spent time and money getting teachers ready for the nationally-crafted standards. They had four years lead time when Indiana adopted the Common Core. Now they have four months to roll out the new expectations.