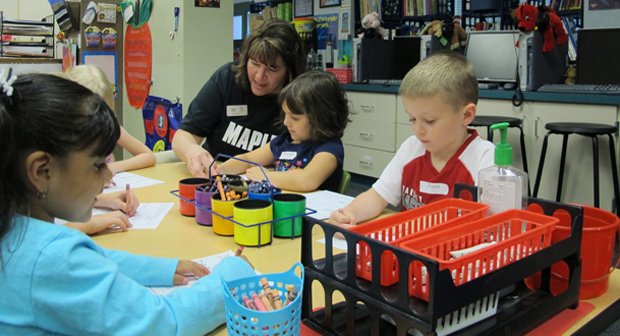 Teacher Janet Craig helps students identify colors during at pre-kindergarten camp at Maple Elementary in Avon, Ind. United Way funds the camp, which is staffed by local teachers and volunteers from the Indiana University Health system.

Fifteen years ago, barely one-third of kindergarten teachers felt it was important their students learn to read before first grade.

Today, according to the American Institutes of Research, that number has shot up dramatically — nearly four in five kindergarten teachers now say their students should be reading.

The analysis offers a telling picture of how expectations of kindergarteners and their teachers have changed in the last two decades.

“In many ways, kindergarten is becoming the new first grade,” write Jill Walston and Kristin Flanagan at The Quick & The Ed.

Consider a few other results in the AIR report:

Interestingly, the number of kindergarten teachers who instruct their students how to “subtract single-digit numbers” hasn’t changed all that much in the past fifteen years.

What has changed, however, according to Walston and Flanagan, are the skills teachers consider critical for children to know on their first day of kindergarten:

Many kindergarten teachers consider it “very important” or “essential” that children entering kindergarten already know how to use pencils and paintbrushes (68 percent), know most of the letters of the alphabet (47 percent), and can count to 20 (35 percent).

Given these high expectations, the value kindergarten teachers place on preschool is hardly surprising. Eighty-four percent of 2010-11 kindergartners’ teachers agree or strongly agree that “attending preschool is very important for success in kindergarten.”

But kindergarten is still optional for the state’s children. Some, including state superintendent Glenda Ritz and State Board of Education member Tony Walker, have argued lawmakers should lower the age at which Indiana children are mandated to begin school.

“I think kindergarten is not optional anymore,” Walker told StateImpact in September. “It’s actually required in order to set the foundation for the kind of student performance we want in later years.”

This year, the early childhood debate has focused on even younger kids, with Gov. Mike Pence and other top Republicans throwing their weight behind an expansion of the state’s voucher program to cover pre-K for low-income children.