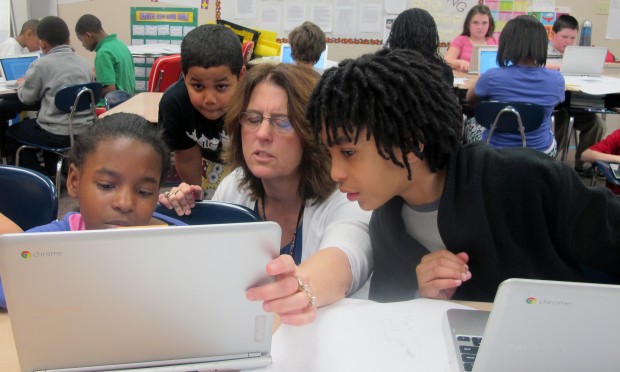 Warren Township fourth grade teacher Fatonia Shank and her students crow around a laptop to look at a document. Students were working on stories after a peer-writing exercise.

Education policy watchers have been expecting this for months, ever since Pence announced the Indiana would write its own education standards during his State of the State address.

“I believe education is a state and local function,” Pence told reporters Monday after affixing his signature to Senate Bill 91.

Indiana is the first state to exit the national initiative to share academic standards — and that has many teachers worried.

“I hope we’re not the island in the middle of the country,” says Fatonia Shank, fourth grade teacher in Indianapolis’ Warren Township who wanted to keep the Common Core in Indiana.

What ‘Pausing’ The Common Core Has Meant For Schools

Shank’s students sit cross-legged at the front of the classroom, practicing multiplication on dry erase boards. She crouches down to help one student. 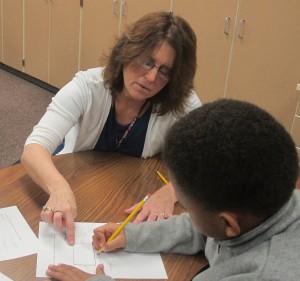 Instead of using what’s known as the standard algorithm, Shank’s students learning a different way.

“And what model did we use here?” she asks.

“That worries me,” says Shank. “The thing is, how can you pause? You know, what does it mean to pause? Because teachers have been getting ready for this. And some schools have already started. We did it in kindergarten, we did it in first grade. So now those kids, we’re saying, we got to pause. So what does ‘pause’ exactly mean to us?”

Districts across the state have already purchased new textbooks and retrained teachers to teach to the standards. But next year Shank will be expected to use new, state-specific standards.

Critics Say New Standards Overlap Too Much With Core

Now that Indiana’s Common Core pause is a full stop, it’s unclear what that means for the rest of the school year. State education officials have until July to adopt new expectations for students.

But state superintendent Glenda Ritz has said she wants that work done sooner — this spring, so teachers leave for the summer knowing what they’ll be expected to teach in the fall.

“We have hundreds of people involved in this entire process, multi-tiered, and I feel very confident we’re going to come out with standards that we like,” she says.

“It’s probably the most vigorous, the most transparent and comprehensive evaluation of standards that’s ever been attempted by a state,” says Pence.

Still, Common Core critics aren’t satisfied. Sen. Scott Schneider, R-Indianapolis, penned SB 91 — then removed himself as an author in protest. He says the draft standards going to the State Board next month are too similar to the nationally-crafted expectations they’ll replace.

But for teachers such as Shank, they just want the process to be done.