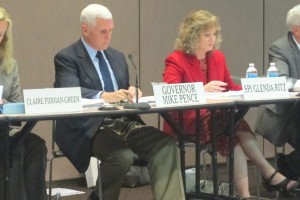 The Education Roundtable has recommended the State Board adopt proposed education standards to replace the Common Core in Indiana schools.

Gov. Mike Pence and state superintendent Glenda Ritz both thanked the Hoosier educators and experts who have been working to craft the new standards for the past several months.

“As the first state to withdraw from Common Core, I believe Indiana had a unique responsibility to create new standards in an open and serious process,” Pence said.

But Pence drew jeers and laughter from the crowd when he praised efforts to write standards “by Hoosiers, for Hoosiers.” About 200 people affiliated with Hoosiers Against Common Core rallied at the statehouse before the Education Roundtable meeting and marched in with signs panning the state’s efforts to write new standards.

Pence waited for the laughter to die down before continuing. “For my part, I trust Hoosiers,” he said. “I trust our teachers.”

Staff from the Department of Education and the governor’s Center for Education and Career Innovation walked the panel of education, business and legislative leaders through the process used to create the proposed standards standards.

“It wasn’t just a cursory review,” said Ritz. “We actually evaluated every single one to come up with the standards we have now.”

The panel voted 21-3 to adopt the proposed English language arts standards, and 21-2 to adopt the math standards. Sergio Aguilera, the retired Mexican Consul to Indianapolis, abstained from one vote.

The lengthy conversation about whether to adopt the standards left no time to discuss Indiana’s next statewide assessment, which will replace the ISTEP+ in spring 2016.

Robinson says teachers need to know what test is coming so they know how to implement the new standards in Indiana schools.