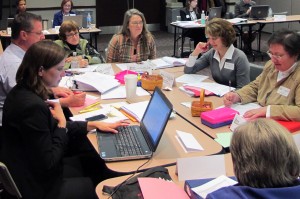 “The last thing we want,” says Amy Horton, Superintendent of Student Achievement and Improvement for the Indiana Department of Education, “is to have too many standards the teachers can’t teach.”

Horton is among the three or so dozen state education officials, K-12 teachers and professors who spent Thursday hammering out the details of Indiana’s next academic standards.

Their job is to whittle down several sets of student expectations into the best possible academic standards — all before next week.

It’s a tight timeline for new standards to replace the Common Core, nationally-crafted student expectations Indiana adopted in 2010. Amid backlash from Indiana lawmakers and angry parents who see them as inferior to Indiana’s old expectations, state education officials agreed to a full-scale review of the Common Core.

Teams of subject-matter experts have spent the past several weeks evaluating various sets of standards based on Indiana’s definition of college- and career-readiness:

An individual has the knowledge, skills and abilities to succeed in post-secondary education and economically viable career opportunities.

Participants reviewed several sets of standards, including both the Common Core and Indiana’s previous expectations for students. They could mark each individual standard as “aligned” with the college- and career-readiness definition, “nearly aligned” or “not aligned.”

Then, this week, teams of evaluators looked at similar standards to pick the best ones for Indiana students. For example:

“These people have done a yeoman’s amount of work in a short amount of time,” says Indiana Department of Education deputy superintendent Danielle Shockey.

The standards panels are looking for a couple of things at this point, says Shockey. They need to ensure each standard is in the appropriate grade. They’re also looking for “vertical alignment” — standards that build on each other and progress logically year over year. And they also want to ensure that there’s nothing in the standard that would dictate how it’s taught.

State education officials brought in Sujie Shin, assistant director of the Center on Standards and Assessment Implementation, to help facilitate the process.

“I think you should feel really strong and confident that this process is driving forward a set of standards for Indiana students that really reflects your definition of success and college- and career-readiness while remaining pedagogically and ideologically free,” Shin told the panels.

Hoosiers Against Common Core, the group that led the statehouse charge against the nationally-crafted academic standards, is skeptical of the work the panels are doing. In a blog post, parent Heather Crossin writes that too many participants are on the record supporting the Common Core:

Nevertheless, as anyone who has ever followed committee work knows, the “who” is usually a far more determining factor in predicting the outcome than the “how.”  When examining the “who” of the standards review panels, it is glaringly apparent that the “new” draft standards for Indiana will most likely be a repackaged version of Common Core, or something equally as mediocre.  While they may end up being “for Hoosiers, by Hoosiers,” it’s hard to be optimistic that they will be “uncommonly high” or “among the best in the nation.”

State Board member Brad Oliver, however, says he believe the education department and the Center for Education and Career Innovation did a good job of selecting panelists who will provide an objective analysis of the standards.

“I think criticism of the process is to be expected,” Oliver told StateImpact Thursday. “I don’t think we have a perfect process; we have a useful process.”

Hoosiers Against Common Core members also questioned the credentials of several panelists during the February State Board meeting. Crossin and co-founder Erin Tuttle want more professors of mathematics and fewer professors of math education involved. But Oliver says the panelists all achieved bachelor’s and master’s degrees in math sciences before pursuing their doctorate research in teacher education.

Oliver says if the draft standards aren’t satisfactory, parents and teachers will have a chance to offer feedback at public hearings. But he says he believes the process should address some of the most cited criticisms of the Common Core.

Draft standards will be posted on the Indiana Department of Education’s website on Feb. 19. They’ll be open for public comment for about three weeks. The State Board will take feedback on the draft standards at a series of public meetings later this month:

The department will be looking for feedback on specific standards, not necessarily comments on the Common Core or the standards review process.

After public comment closes, the draft standards will go back to the standards evaluation panels and to the Indiana Education Roundtable before the State Board votes April 9.