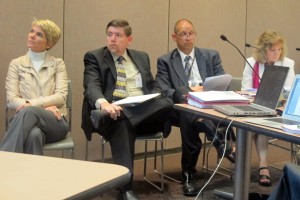 The new math and English language arts standards replace the Common Core in Indiana after months of debate about what students should know and learn at each grade level.

Ritz says the next step is making sure teachers are ready to roll out new expectations in the fall.

“So we’ll begin getting information out to them early this summer, and they’ve already got the standards, they’re already looking at things,” says Ritz. “Teachers will go home and start to think about lessons that will align with them.”

But after Monday’s meeting, it seems unlikely the new standards will quell all opposition to the nationally-crafted Common Core standards.

Gov. Mike Pence, who promised standards “by Hoosiers, for Hoosiers” during his State of the State address, strongly endorsed the proposed standards at last week’s Education Roundtable meeting.

But opponents of the nationally-crafted Common Core expectations say the new standards are just a rebranding of subpar expectations. Heather Crossin, co-founder of Hoosiers Against the Common Core, called the process to rewrite the standards a “sham.”

The board listened to about an hour of public testimony before the vote. The majority of speakers wore anti-Common Core buttons and opposed adoption of the new standards.

State Board president Dan Elsener thanked the anti-Common Core speakers for being there and encouraged them to stay engaged with their kids’ schools, even if they did not agree with the outcome of the vote.

“The folks that are concerned about this are not the problem,” he says. “They’re part of the solution.”

Board member Tony Walker, who says he believes Indiana should have kept the Common Core, encouraged everyone to remember standards are just one piece of the puzzle.

Walker says instead the focus needs to be on how to help move low-achieving students towards success.

Only Andrea Neal, an English teacher at St. Richard’s Episcopal School in Indianapolis, voted against the proposed expectations.

“They will diminish the role of literature in the English classroom, and it is the reading of good literature that will turn our children into critical thinkers and critical writers,” she said in a statement.