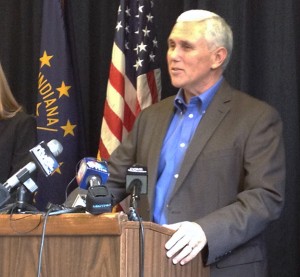 Each of those items will have a significant fiscal impact and so far, Pence has been coy in talking about ways to pay for his plans. He says that’s for good reason.

“I want to give legislators the broadest possible range to develop how they think this might work best giving consideration to all of the interests involved,” Pence said.

Pence says he’s had good discussions with legislative leaders about options to enact parts of his agenda but doesn’t want to speculate publicly about those options.  He says that will allow the broadest range of debate.

And that makes Pence’s leadership style very different from his predecessor, Mitch Daniels, who took a much more active role shaping education legislation during the 2011 session. From an AP analysis:

[Pence] lacked the ability to lay that critical groundwork during his first session, taking office one week after lawmakers had already returned to work and struggling to find his footing in a new Capitol. By the end of four months, he walked away with some modest successes and a few losses. But his team spent the summer and fall prepping and retooling in advance of 2014.

Good prep work and legislative relations can make or break a governor’s plans.

Emails obtained by The Associated Press earlier this year detailing the creation of former Gov. Mitch Daniels’ ambitious 2011 education agenda, showing how a small group of powerbrokers set the policy and slowly expanded their circle through most of 2010. Indeed, Daniels and his team went beyond simply crafting the policy, into electing the supporters needed to approve the measures as part of an incredibly coordinated campaign.

Last week we did the back-of-the-napkin math for Pence’s pre-K proposal. His plan to cut the business personal property tax would also have a significant impact on school budgets.

But as the AP points out, Pence will be working against the clock because it’s not a budget year — lawmakers are expected to wrap up their work in mid-March.