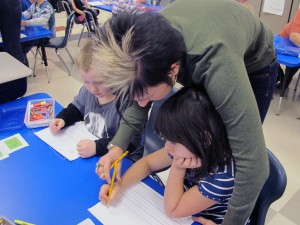 Lisa Coughanowr, a kindergarten teacher at East Side Elementary in Brazil, helps a student draw a classmate.

Students in Lisa Coughanowr’s kindergarten class at East Side Elementary in Brazil, Indiana, are already learning to write sentences.

They’re supposed to draw a picture of a classmate, and then list something they like about that person. But several students are struggling with the illustration portion of the assignment.

“The ones that aren’t quite ready, they draw arms coming out of heads,” says Coughanowr. “It’s so developmental. They just can’t get the concept that your arms come out of your body, not your head.”

This is the second year kindergarten teachers in Indiana have taught to the Common Core, a set of nationally-crafted academic standards adopted by 46 states and the District of Columbia. Under the new standards, kids are supposed to be able to compose basic, explanatory texts by the time they leave kindergarten.

Coughanowr says that in her experience, students eventually catch on. But some early education experts argue 5- and 6-year-olds are too young to master those skills.

“It appears that early childhood teachers and child development experts were excluded from the K-3 standards-writing process,” write educators Edward Miller and Nancy Carlsson-Paige. From The Answer Sheet:

1. The K-3 standards will lead to long hours of direct instruction in literacy and math. This kind of “drill and grill” teaching has already pushed active, play-based learning out of many kindergartens.

2. The standards will intensify the push for more standardized testing, which is highly unreliable for children under age eight.

3. Didactic instruction and testing will crowd out other crucial areas of young children’s learning: active, hands-on exploration, and developing social, emotional, problem-solving, and self-regulation skills — all of which are difficult to standardize or measure but are the essential building blocks for academic and social accomplishment and responsible citizenship.

4. There is little evidence that standards for young children lead to later success. The research is inconclusive; many countries with top-performing high-school students provide rich play-based, nonacademic experiences — not standardized instruction — until age six or seven.

Miller and Carlsson-Paige’s critique of the Common Core, along with a New York Post piece about kindergarteners cracking under pressure, ignited a debate this week about how the new standards are shaping early education.

Audrey Fetters, a kindergarten teacher at Flint Springs Elementary in Huntington, told StateImpact she thinks kids need play and creativity if they’re going to master foundational skills. She says there’s no room in the 90-minute literacy block that’s part of the Common Core for arts and crafts.

“When else in my day am I going to do that?” Fetters says. “I hardly get the paint out anymore. I still sing all the time, but I think one of the things that really suffered was that creativity and spontaneity.”

Why Others Argue The Common Core Will Boost Reading Skills

But not all kindergarten teachers feel the same way.

“Always before we thought they couldn’t handle it. But surprisingly, they can,” says Coughanowr, adding that she had similar concerns when Indiana began transitioning to full-day kindergarten a few years ago. She thinks her students have largely risen to the new standards’ challenge. 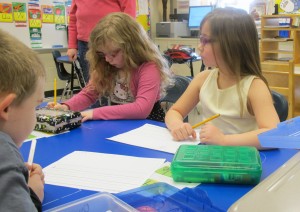 Kindergarteners at East Side Elementary in Brazil practice writing.

Ed Hirsch, a former education professor and proponent of the Common Core, offered this response to challenges that the new standards are a “threat” to young students:

Of course, much more goes into reading at age 17 than early childhood education, and there has been some recent improvement among 9-year-olds in reading, especially among our lowest-performing students. Why hasn’t this improvement carried into later grades? As I have argued many, many, many times, the fundamental problem is that American schools, including preschools, typically delay systematic efforts to build students’ vocabulary and knowledge until far too late (usually the end of elementary school or even later).

Building word and world knowledge must begin in preschool if we are to have any hope of closing the enormous language gaps identified by Betty Hart and Todd Risley, or of enabling children to listen and read with comprehension.