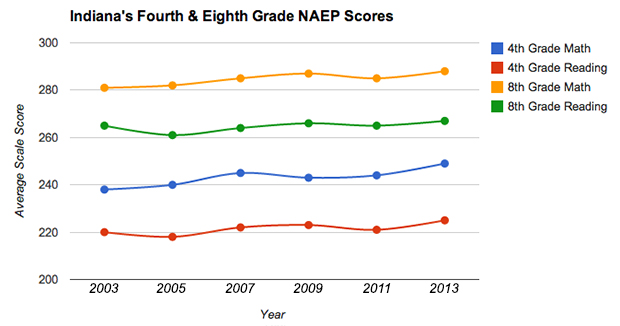 How much has Indiana’s performance on the nation’s benchmark standardized tests changed since their last release in 2011? The answer depends on how much you’re willing to make of just a few points.

That may not seem like much on the NAEP’s 500-point scale. Still, that’s a bigger jump than all but a handful of other U.S. states saw in fourth graders’ scores. Hoosier eighth graders posted less jaw-dropping scores, but gains nonetheless.

Nationally, though, achievement gaps between white, black and Hispanic students remained as stubborn as ever. The country’s overall scores edged up only slightly.

“We’re not seeing yet the transformational change nationwide,” U.S. Secretary of Education Arne Duncan told reporters. “But we are seeing meaningful, but generally-modest progress.”

The NAEP is different from other standardized tests Indiana students take. The national test uses nationally representative samples of students to compare their results across states and over longer periods of time, giving students’ ratings of “Below Basic,” “Basic,” “Proficient” or “Advanced.”

This chart shows Indiana students proficiency levels on each of the four tests: 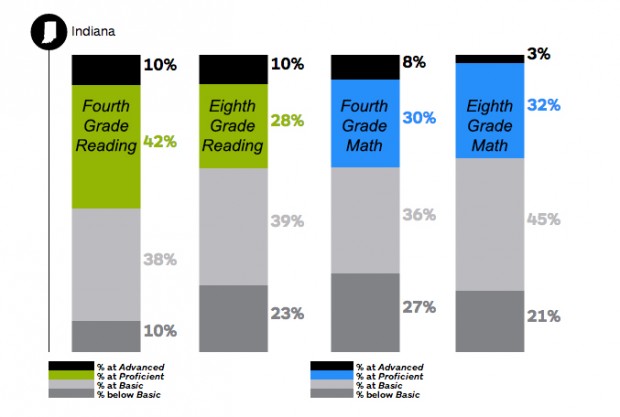 Indiana students' ratings on the National Assessment of Educational Progress.

“I am encouraged by the gains that Hoosier students showed on these tests, particularly their gains in the fourth grade,” state superintendent Glenda Ritz said in a written statement. “This is yet another sign of the hard work and dedication exhibited by our educators, administrators, parents, and most importantly, students every day in our schools.”

“Ritz and the teachers unions have one objective – undoing the reforms of the Mitch Daniels and Tony Bennett era. Rolling back these reforms means ignoring the simple truth – that they are working,” wrote Cam Savage, Bennett’s former communications director, on the Capitol & Washington blog.

What do you make of the results? Let us know in the comments section.