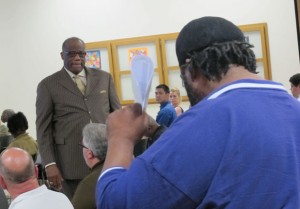 IPS superintendent Eugene White (left) looks on as a member of the public makes his comments during a meeting. Graduation rates are up in Indianapolis, but so are the number of end-of-course waivers the district has granted.

An increase of end-of-course waivers may be fueling gains in the graduation rates of Indianapolis Public Schools, writes Scott Elliott of The Indianapolis Star:

An Indianapolis Star examination of state graduation data shows that IPS’ higher graduation rate is being driven mightily by an increase in the use of waivers — a process that allows districts to award regular diplomas to students who did not pass the state’s required tests for algebra and English.

Statewide, approximately 8 percent of students in 2011 received such diplomas. But in IPS, that percentage was a startling 26.7 percent — a percentage that has been increasing over the past few years.

An interactive map from The Indianapolis Star highlights how many students in each of the state’s school districts are receiving graduation waivers.

Superintendent for Public Instruction Tony Bennett says the waivers were designed to help students with special circumstances and should be used sparingly, not to pass along students who haven’t mastered the skills they need for success after high school.

“We know the vast majority of those who graduate using waivers will need remediation in college,” Bennett told The Indianapolis Star.

The problem is even more pronounced among minority students, Elliott writes. Nearly a third of black students received a waiver to graduate from IPS:

That percentage of black students who used a district-approved waiver is not only high, it is disproportionate even when compared with other demographic groups educators identify as at-risk.

For example, one in seven Indiana students who receive free and reduced-price school meals — a standard measure of poverty — received waivers. For Hispanic students, it also was one in seven.

By comparison, just one in 20 white students received waivers.

Elliott asked local leaders of the black community what might be causing the disparity. Responses included a cultural bias in standardized tests and classroom instruction, but everyone he spoke to agreed ” … African-American children are clearly capable; and it is time to confront these difficult questions.”

For his part, IPS Superintendent Eugene White, who has defended his district’s use of waivers in the past, called the growing number of graduates failing end-of-course exams “unacceptable.” He told Elliott that only students who attend extra study programs during school breaks will be considered for waivers next year.