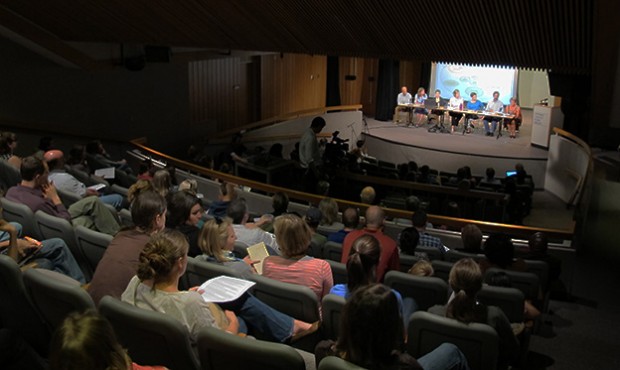 More than 70 people gathered at the Monroe County Public Library in downtown Bloomington to voice their opinion in a public hearing for the proposed charter school. The organizers of Green Meadows Charter School are asking Ball State University for permission to open Bloomington's second charter school in 2015.

UPDATED, Saturday, 11 a.m. — After bringing their proposal as far as a public hearing last month, a group of educators and parents are withdrawing their current request to open Bloomington’s second charter school.

But Mary Goral, who would be the school’s educational director, says the school still hopes to open its doors to students in 2015 as originally planned. The group will submit a new application to open Green Meadows Charter School in the next application cycle, meaning we won’t get a decision on the school’s future this year.

We profiled the group’s effort to open a school that spoke to the liberal arts sensibilities of the college town, promising a focus on music, art and “environmental and social justice.”

But the proposal also sparked an “awkward” debate between Bloomington residents who favored creating a new niche for students who didn’t quite fit in traditional public schools at Green Meadows and those who felt the new charter would divert funding from the Monroe County Community School Corporation.

“The million dollars is a big deal,” MCCSC school board member Sue Wanzer told StateImpact last month, referring to the amount of money the district might have lost if Green Meadows had hit its proposed enrollment target of 200 students.

Most charter schools in Indiana are located around Indianapolis and Gary, but a comparative handful have opened in other areas of the state.

* CORRECTION: An earlier version of this story and its headline gave the impression the group was abandoning its application to open Green Meadows altogether out of concerns over financing its school building. According to Goral, that is incorrect and based on incomplete information. I regret the error and apologize.