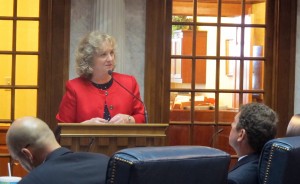 Superintendent of Public Instruction Glenda Ritz explains her vision for Indiana's next test to a panel of state lawmakers tasked with reviewing academic standards.

If our reporting on statehouse conversations about what academic standards Indiana will use next have felt pretty abstract, try on this possible consequence of pausing Common Core rollout in Indiana: Tucked into the Office of Management and Budget report state lawmakers will discuss Tuesday is the possibility students could have to take two standardized tests in 2015.

This spring state lawmakers decided to delay full Common Core implementation until they’d had a chance to review the new standards. That legislation requires Indiana students to keep taking the ISTEP+ through the 2015 biennium.

Earlier this month, Superintendent of Public Instruction Glenda Ritz told state lawmakers that to give two tests next year, “ … would be a duplication of testing. Massive testing. Unnecessary. And a very large cost to the state of Indiana to do both of those.”

Currently Indiana spends about $34 million a year administering the ISTEP+ and End of Course Assessments. But that number would balloon to around $60 million if the state had to administer a second exam in 2014-15.

“I think there’s an absolute possibility and maybe even a likelihood that we will be taking two tests — or putting our federal funding at risk,” Indiana Chamber of President Vice President Derek Redelman tells StateImpact.

Why We’re Talking About The Possibility Of Two Tests

So how did we get here? Keep in mind that the ISTEP+ was on track to be phased out in its current form at the end of this school year as the state made the transition to new, Common Core-aligned tests.

“We already know that some costs of converting over to Common Core have been absorbed. We do know that there are other costs that are yet to be absorbed and there are a lot of school districts that are not all the way there.”
—Senator Scott Schneider, R-Indianapolis

In fact, as part of its No Child Left Behind two years ago, Indiana education officials promised to administer a college- and career-readiness exam by 2014-15.

To satisfy both requirements, the OMB report assumes the state may have to give two tests in 2015. That would be expensive — at least $20 million more than Indiana spends now to assess students. Here’s how much that would cost Indiana, depending on which test the state picks:

Time for some good news: The IDOE is already working on a contingency plan so Indiana students won’t have to take two tests, says spokesman Daniel Altman.

“I don’t think it’s going to come to that,” Altman told StateImpact.

How Indiana’s NCLB Waiver May Shape The Conversation

OK, breath a sigh of relief, parents — your kids probably won’t have to sit for a double round of tests in 2015. But the OMB report adds this caveat to the discussion about delaying the transition to college- and career-ready assessments:

However, the estimates do not include potential federal revocation of funding for full implementation of an assessment that is not “college and career ready,” and at this time ISTEP+ has not been certified as a “college and career ready” assessment. The exact amount of any federal penalty for noncompliance is unpredictable, as is the likelihood that U.S. Department of Education would grant Indiana a waiver for the years in which the future assessment is being developed.

Altman says the U.S. Department of Education is aware of Indiana’s Common Core pause legislation and is working with state education officials on how to move forward. He points out the Indiana’s current waiver will expire before the 2014-15 school year and the state will have to reapply for flexibility under NCLB.

That gives Indiana a chance to develop a solution that satisfies both state and federal requirements, says Altman.

Superintendent Ritz has said all along that Indiana has a plan to transition ISTEP+ to new Common Core-aligned tests. But as the OMB report demonstrates, that’s probably going to come at some cost to taxpayers.

Still, Senator Scott Schneider, R-Indianapolis, argues the conversation about standards that’s happening at the statehouse now is one Indiana can’t afford not to have.

“Certainly cost is always part of the discussion and should always be part of the decision,” says Schneider, who penned Indiana’s anti-Common Core legislation. “I think it’s in the best interest of our state and kids and parents and teachers to come out of this with a clear understanding of what the best standards can be for Indiana.”

Schneider wants to see Indiana opt out of the Common Core. He doesn’t like the idea of nationally-developed standards and thinks the state would be better off designing its own expectations for students.

But according to the OMB report, the new tests wouldn’t be ready until 2016 at the earliest — after the federal deadline. And the U.S. Department of Education has been cracking down on states that have missed promised deadlines.

Over the summer, three states saw their waivers reclassified as “high risk” because they didn’t implement new teacher evaluation systems on time. Kansas, Oregon and Washington are already facing financial penalties. If things don’t improve, the U.S. Department of Education could revoke Title I dollars used to help disadvantaged students.

Worse yet, the states could lose their waivers entirely. That would mean going back under No Child Left Behind accountability, which requires 100 percent of students reach proficiency by 2014.

“People keep thinking, ‘Ah, this will never happen,’” says Redelman. “But in the last few months, the U.S. Department of Education has shown that they’re serious about holding states to the plans they said they will follow.”