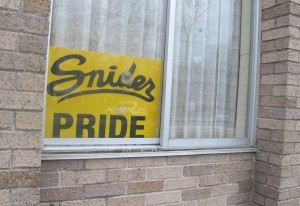 Seven Indiana school corporations are holding a special election next week to ask voters to approve a property tax increase, the same number that pursued May referenda in each of the last two years.

That’s good news for school finance watchers who feared an ever-increasing number of ballot initiatives after 34 school corporations made taxpayer appeals in 2010.

For years, neighboring states have asked voters to approve rate increases when local schools wanted to construct new buildings or renovate old ones. But Indiana is still relatively new to referenda. Since 2008, 80 school referenda questions have appeared on the ballot.

It might sound like a lot, says Larry DeBoer, an agricultural economist who studies school finance at Purdue, but it’s not relative to the total number of districts in Indiana.

“Most school corporations have not touched this thing,” he says.

Still, DeBoer says there have been some surprises: For one, he expected construction referenda to pass more easily than general fund levy increases.

“When people know exactly what the money is going to be used for, they’re a little more favorable than if you say, ‘We’re going to raise taxes and do good things with the money.’ Of course, with general fund, it could be anything,” says DeBoer.

But the scorecard so far says otherwise. Half of all general fund levy increases have passed, but only about 40 percent of proposed construction referenda. Here’s a look at the asks the seven Indiana school corporations seeking referenda this spring are making.

Hamilton Southeastern is pursuing a 13.5-cent levy increase to raise $95 million to add on to the two high schools.

“We have students in the lower grade levels come up through the system that are going to put a significant load on the secondary schools,” says Superintendent Brian Smith. “We knew this was coming. It’s a large group of kids, and by 2015 we need to have additional space available.”

Smith says if the referendum passes, it will allow Hamilton Southeastern to add “senior academies” to each of the two schools, expanding dual-credit offerings from Indiana University, Purdue University and Ball State. The additions will include new classroom space that students and teachers designed to facilitate project-based learning.

The Knox Community School Corporation is pursuing a 28-cent levy increase to raise $16 million to replace part of the elementary school, which was built in the 1950s.

“The equipment at that end of the building is outdated,” says Superintendent A.J. Gappa. “The electricity is maxed out, so we’re not able to run computer carts during ISTEP+ testing, which has to be online as we move forward.”

A facilities study four years ago put the cost of renovations at $12.5 million. But Gappa says the district soon realized they could probably build a new wing for what it would cost to update all the pipes, plumbing and wiring in the old one. He’s been bringing in community groups to tour the building in hopes of selling the referendum to voters.

“To quote one guy, ‘You just need to bring in a bulldozer, and that’ll fix this,’” says Gappa.

The district also plans to upgrade its administrative offices and improve school security if the referendum passes.

Noblesville is asking voters to approve a 10-cent levy increase to raise $28 million to add on to the high school.

Currently, ninth graders attend classes at a separate freshman center. But if the referendum passes, they would move back to the main campus, freeing up that space for East Middle School to move in. Public Relations Director Sharon Trisler says the plan is to sell the current middle school space to the county, which would lease it to Ivy Tech Community College.

“If it does not pass, it would be the status quo,” says Trisler. “We would eventually need to move a lot of portable classrooms to the main campus of the high school because the classes that are graduating are smaller than the classes coming up. We’re replacing classes of 500 with classes of 600, 700 and 800.”

The Barr-Reeve Community School District in Montgomery is asking for a 35-cent levy increase.

“Currently, on my 2013 budget, I’m using the same revenue stream that we were getting in 2001,” says Superintendent Travis Madison. “We had a hefty rainy day balance over that course of time, but it’s all gone now.”

Madison says the district has done what it could in recent years to make up for a shortfall in funding from the state, but cuts to grants that helped small schools have hurt Barr-Reeve.

If the referendum doesn’t pass, Madison says he’s hopeful he’ll be able to make up the deficit by not rehiring eight positions after teachers retire this year.

“But that would be something a lot of folks would not be very happy with,” says Madison.

The Metropolitan School District of Boone Township is asking for a 23-cent levy increase.

One of the school corporations hit hard by property tax caps, the district has tried to attract new revenue streams. Superintendent George Letz says about 80 students enrolled this year from outside of the district. But it hasn’t been enough.

“We had no choice but to go hat in hand to our patrons and ask for the 23-cent increase,” says Letz. “Of course, since we’re a rural district with a low assessed value and a high tax rate, when we ask for 23 cents it’s different than when districts with high assessed valuations when they ask for an increase.”

Letz says a citizen group has been advocating for the tax rate increase, so right now he’s optimistic. But if the referendum doesn’t pass, he’ll have to cut nine teaching positions, three each from the elementary school, middle school and high school.

The School Town of Munster is asking for a 20-cent levy increase.

“We’re a high achieving school district with not a high percentage of kids on free or reduced lunch, so we come out on the short end of the funding formula,” says Superintendent Richard Sopko.

He’s talking about the complexity index, which increases a school’s per pupil funding amount. This year the district received about $5,400 per student — about $1,000 less than the state average.

Sopko says the district has cut more than $5 million in operating expenses over the last three years and drained its rainy day fund to stay afloat. He says he knows people move to Munster for the schools, but the district will have to make deep cuts if the referendum doesn’t pass.

Union Township is asking for a 22-cent levy increase.

Superintendent John Hunter says the district has been running a deficit of about a $1 million a year for the past several years.

“Obviously we cannot continue to operate with a deficit,” he says. “You can only go back to your rainy day fund and your savings account before you deplete those as well.”

Hunter says if the referendum doesn’t pass, it would mean cuts to staff, programs and extracurricular activities.

“We’re at the point where we have to have the money in 2014 or the programs have to be cut,” says Hunter. “I cannot wait until the next general election to do that.”