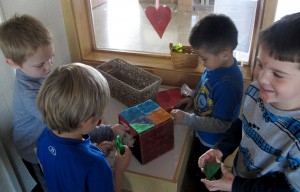 Faced with the possibility of consolidating with a neighboring school district, voters in Northeastern Indiana overwhelming approved a steep property tax hike to save Hamilton Community Schools.

“In Indiana, for the past several years, it has been very difficult to get referendums passed of any kind, relating to schools, and for us to win is very gratifying,” Superintendent Jon Willman told StateImpact. “I think it reflects the support we have from our community.”

In Columbus, the school district and the Community Education Coalition hoped to secure additional funding for a public-private pre-kindergarten partnership. About 180 students currently attend Busy Bees Academy, and the referendum would have added capacity for about 200 more through a 5-cent per $100 of assessed valuation property tax increase.

But voters weren’t sold on the plan. Now Columbus will have to re-evaluate how it pays for low-income students to attend preschool, says Community Education Coalition President John Burnett.

Indiana is one of eight states without a state-funded early education program. But paying for preschool isn’t a priority for Governor-elect Mike Pence, who offered praise for Busy Bees and other community early education initiatives on the campaign trail.

Tuesday was Mt. Vernon’s second attempt to pass a general fund referendum since the state changed how it funds education.

The district had 16 years of continuous growth and took on debt to pay for new building projects, says Assistant Superintendent Mike Horton. A victim of the property tax cap, the district appeared before the Distressed Unit Appeals Board earlier this year to ask for a loan from the state’s rainy day fund. But voters rejected the proposed 8-cent per $100 of assessed valuation increase.

“We’ll continue to look at ways to cut as much as we can,” says Horton. “We’re currently living under our means, but the difference is making up what we had to take to make up for our debt service.”

Hamilton Says Referendum Will Give District Chance To Grow

Back in Hamilton, Superintendent Willman says his goal now is to make sure the district doesn’t have to ask voters for more money in the future. The district sought its referendum to make up a shortfall in funding caused by declining enrollment.

Willman told StateImpact last month that he thinks if he can add about 100 students — that’s just 10 to 15 a year by his calculation — the district will get enough revenue from the state to stay open.