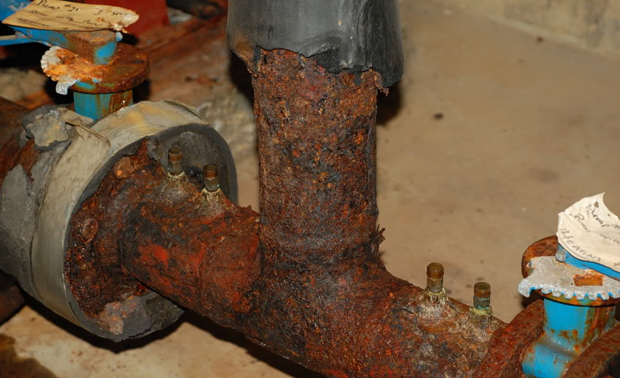 Rusting pipes in the basement of Snider High School would be replaced if voters in the Fort Wayne Community School District approve $119 million in building projects and infrastructure repairs. More than half of the district's 51 school facilities would receive upgrades if the referendum passes.

Voters in Fort Wayne Community Schools, Indiana’s second-largest school district, are weighing in on a $119 million construction referendum that would pay for building projects at 36 of the district’s 51 schools, upgrading HVAC systems, replacing windows and restoring the masonry.

“I wouldn’t even call them improvements,” said John Peirce, vice president of the Fort Wayne Board of Trustees. “It’s repairs.”

Fort Wayne is one of seven Indiana districts are waiting Tuesday to see if taxpayers accept or reject their appeals for additional funding. Those who support the requests say they reflect their districts’ needs, not wish lists. 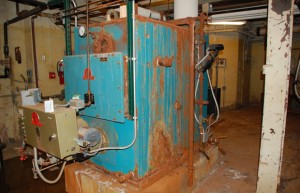 A decades-old steam heater in the basement of Harrison Hill Elementary is slated for replacement if voters in the Fort Wayne Community School District pass a $119 million construction referendum.

Districts trying to pass construction referendums and tax levy increases face an uphill battle. The same down economy that has dried up schools’ general funds and left them in a position to ask for money also makes voters reluctant to raise their own taxes.

Peirce, who has been leading the campaign to educate voters about Fort Wayne’s construction needs, said many of the district’s schools were built quickly in the ’60s and ’70s to accommodate the Baby Boomers. Now the district can’t keep up the repair schedule on the aging facilities. A more ambitious $500 million school improvements proposal failed in 2007.

The district’s chief concern is 47-year-old Snider High School, where a leaky pipe last month cut off air conditioning to 60 classrooms. The district had to hire an outside crew to complete the repair. Peirce said he isn’t sure what the district will do if the referendum doesn’t pass, but it’s likely Fort Wayne would have to come up with another way to pitch the idea to voters.

“Emergency repairs are far more expensive than taking care of problems so you don’t have to make them,” he said.

My School Owes Who? How Bonds Work.

Crawfordsville Community Schools Superintendent Kathy Steele can relate. The district is trying to pass a $35 million referendum to rebuild Tuttle Middle School. The existing building has “major structural problems” and vertical cracks running up and down the walls, Steele said. There have been two major plumbing problems in the last two years, and last month, the district faced a $3,000 water bill – usually around $600 – after multiple companies failed to locate a leak.

“The only way to get to the pipes is to tear up the terrazzo floor, jackhammer through the concrete and try to find the leak,” Steele said. “The last time we had to tear up the hallway between the library and the cafeteria. It’s very disruptive to the educational process.”

Water from a leaking roof damaged $15,000 in library books last year, and every spring, the school, which doesn’t have a computer lab, struggles to complete state testing in classrooms that were built with just two electrical outlets.

Even with community support for a new middle school, Steele said promoting the referendum would be easier if ballot language – set by the state – didn’t label it as a “tax increase.” In Crawfordsville, the 19-year-old high school will go off the bond payment in 2013, making the referendum tax neutral.

The Northern Wells Community School District has been trying to fund improvements at Norwell High School for years, scaling back what it asks voters for each time. A proposal to build new classroom space failed in 2007. In 2010, the district asked voters to pass a construction referendum for renovations only. The referendum was narrowly defeated, so the district is trying again.

“The only way to get to the pipes is to tear up the terrazzo floor, jackhammer through the concrete and try to find the leak. The last time we had to tear up the hallway between the library and the cafeteria. It’s very disruptive to the educational process.”
—Kathy Steele, Crawfordsville Community Schools Superintendent

New Haven Mayor Terry McDonald, for example, said he opposes the $88 million plan because he believes the district could have created a more efficient redesign plan, such as closing some of the district’s high schools.

He also said he’s concerned that the board has no backup plan if the referendum fails.

“As a person, I don’t plan on voting for it,” he said. “I’m not out actively telling people not to vote for it. I just don’t think the school board has done an adequate job planning for the future education of our students.”

Even in school districts where organized opposition hasn’t formed, officials say they’re fighting voters’ knee-jerk reaction to reject anything that has the words “tax increase” next to it on the ballot. That’s why it’s important to educate taxpayers on the issues before they get to the polls.

“We’re asking people to tax themselves,” said Peirce. “There’s no organized resistance, but our biggest concern is voter apathy. We’re afraid people in favor of the referendum won’t show up at the polls.”

Voters in Boone County already approved a referendum to restructure school debt in November.  Now the Zionsville Community School Corporation is asking for a 24-cent levy increase to make up for a funding deficit caused by property tax caps. The district has added 450 students since 2008, but per pupil funding is down 20 percent.

In 2010, voters in the Zionsville school district rejected a 29.5-cent levy increase. If this measure also fails, the district has unrolled an austerity plan that calls for cutting 16 teaching positions, middle school foreign language classes and some art and music programs.

“We’ve eliminated 17 positions in three years, and if the levy doesn’t pass, we’ll have to eliminate at least 18 more. If we lose people, we’ll lose programs because people are programs. We won’t have those individuals to teach or coach.”
—Dirk Baer, Duneland Superintendent

Fine arts would also be on the chopping block in Duneland if voters don’t approve the proposed 22-cent increase. Superintendent Dirk Baer said the district will have to make deep cuts just to stay afloat.

“We’ve eliminated 17 positions in three years, and if the levy doesn’t pass, we’ll have to eliminate at least 18 more,” said Baer. “If we lose people, we’ll lose programs because people are programs. We won’t have those individuals to teach or coach.”

A political action committee formed to educate voters on the proposed tax increase – districts aren’t allowed to use school funds to promote referendums and levies – and Baer said he is “cautiously optimistic” about Duneland’s chances Tuesday. If the levy does pass, Baer said, the district may be able to re-hire some of the positions it lost previously.

Declining enrollment has hurt Oregon-Davis Schools, which could face merging with another corporation if Tuesday’s levy fails. At a public meeting sponsored by the school district, community members said they’d rather try putting the levy on the ballot first. Already, the district has dipped into its rainy day fund to complete the school year.

“We’ve cut [the budget] down, and we’re going to still have to make some cuts,” Superintendent Steve Disney told The Pilot News. “But now you’re getting into, ‘What do you want your schools to look like?’ Oregon-Davis is the focal point of that community, and it has a history. And what keeps that part of the community together? There’s nothing else in that community that brings people together other than that school, and it’s going to be a choice to the voters.”

Meanwhile, the Mt. Vernon Community Schools Corporation had been planning to ask voters to allow it to restructure its debt after a 12-cent school tax levy failed in 2010. That’s no longer necessary thanks to legislation that passed earlier this session that allows financially distressed school districts to refinance debt without going through the referendum process.

If you live in a county that’s voting Tuesday on a school referendum, find out how the proposed increase will affect your taxes using an online calculator from the Indiana Department of Local Government Finance.