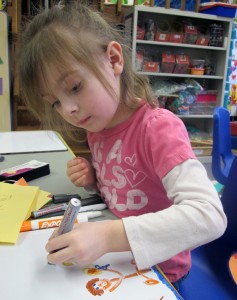 A Head Start student draws in her classroom at Eastview Elementary in Connersville.

Automatic federal spending cuts kicked in Friday, but many Indiana Head Start programs say they’re still in the dark when it comes to details about the sequester. They know they’ll have to make cuts — but they aren’t sure yet how much.

“I hear from a lot of programs, though, that they are now cutting into the bone,”  says Indiana Head Start Association Executive Director Cheryl Miller. “They’ve trimmed everything they can possibly trim.”

Next week we’ll continue covering what the automatic federal spending cuts mean for Indiana schools. Even though no district stands to lose more than 3 percent of its overall revenue, schools will see a reduction in aid for students in special education and from low-income families.

Those education stories and more, below.