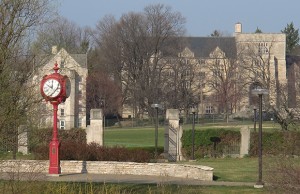 The campus of Indiana University in Bloomington.

Do you pay taxes? Do you pay for college? Boy, does Congress have a “fiscal cliff”-averting package for you!

As part of the deal struck Tuesday to stop widespread tax hikes and stave off deep automatic spending cuts, lawmakers either made permanent or extended several key tax benefits for college students and their families.

But there’s the potential for another “knock-down, drag-out” fight in two months before the automatic spending reductions kick in. The cuts — just like in the K-12 arena — would slash federal financial aid funding by 8.2 percent.

And as some federal education budget watchers are pointing out, sequestration (read: automatic cuts) isn’t the only lingering issue Congress left unresolved this week.

Why don’t we start with the good news for borrowers out of the deal, eh?

The American Opportunity Tax Credit of $2,500 to help offset the cost of tuition, fees and course materials was extended through 2017, reports The Choice blog. The New America Foundation says the move will cost $67 billion on its own over the next ten years, making it the costliest of the tax benefit extensions.

Under the deal, the Tuition and Fees Deduction will continue through the end of 2013 under the deal, allowing anyone making less than $65,000 per year to claim up to $4,000 in tuition expenses.

In addition, up to $5,250 of employer-provided assistance for higher education expenses can now not be considered taxable income — that’s according to a provision that the legislation makes permanent, at a cost of $11 billion over the next decade.

The folks at New America’s EdMoney Watch — who put together a handy chart of all the extensions and deductions — point out that the costs of these deductions add up.

“Exemptions, credits, and deductions now account for over $30 billion a year in ‘spending,'” writes Clare McCann, who adds the deal is a short-term fix:

Moreover, the deal Congress produced failed to answer other questions. Sequestration, the across-the-board cuts to virtually all programs scheduled to occur on January 2, 2013, for example, remains unresolved. Instead of either implementing the cuts this month or cancelling the threat of sequestration, the cuts have been delayed until March 1, 2013. That’s just a few weeks before the short-term continuing resolution, under which the federal government is currently operating at fiscal year 2012 funding levels, expires.

And according to the Treasury Department, the U.S. hit the debt ceiling – its borrowing limit – on Monday. Treasury Secretary Tim Geithner said the Department would engage a set of “extraordinary measures” to buy time, giving lawmakers until late February to act.

Unless Congress acts before March 1, Mr. Kantrowitz said, fewer students will be able to get work-study jobs and Federal Supplemental Educational Opportunity Grants, as these programs would experience cuts. Fees for federal education loans would go up, he added, and the maximum Pell Grant would be cut by as much as $400.

“If past is prologue,” Mr. Kantrowitz writes, “there will be more brinksmanship on Feb. 28.”