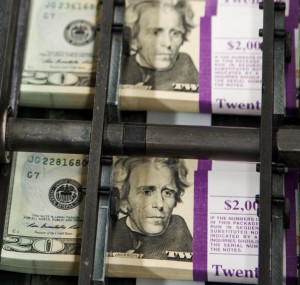 Bundles of $20 bills roll through the printing press at the US Bureau of Engraving.

Jennifer Cohen Kabaker at Ed Money Watch has this breakdown of how automatic federal spending cuts scheduled for January will affect schools nationwide:

[Automatic budget cuts] resulted from the “supercommittee’s” failure to find $1.2 trillion in 10-year cuts to federal spending (or tax increases) last year. According to the report, the majority of Department of Education spending programs will face an 8.2 percent cut as a result of the sequester. Unless Congress and the President agree to turn off the sequester, school districts across the country will face some difficult budget decisions starting in January and continuing into the 2013-14 school year.

Overall, Indiana school districts stand to lose a sum total of more than $114 million because of a 7.8 percent across-the-board cut, the analysis shows. That said, no district would lose more than 3 percent of their total revenues because of the automatic cuts.

We’ve pulled the numbers for Indiana districts from Ed Money Watch’s dataset and posted it to a Google spreadsheet. Check it to see how much your district would lose if federal funding were cut by 7.8 percent.

We pointed you to a similar Ed Money Watch analysis earlier this month: The blog — a product of the non-profit New America Foundation — had crunched the numbers and calculated how much individual school districts could lose under Rep. Paul Ryan’s proposed budget. His plan calls for a 20 percent cut to all discretionary federal spending, which includes education.

But Ryan’s budget is still hypothetical. The automatic budget cuts — “the sequester” or “sequestration” cuts — have already passed through Congress, and if you want to cut education spending, Cohen Kabaker argues this is not the best way to do it:

Sequestration is a blunt instrument that prevents Congress from targeting spending cuts to the programs that are best equipped to face such cuts. Limiting federal spending may be a worthy goal in this austere time, but the current method stands to hurt the school districts and students that need the extra funding support the most. This is not an argument for increasing federal spending, but rather an argument for ensuring that any decisions to cut such spending are done thoughtfully and with an eye towards equity.

Which districts would lose the most? The list looks a lot like the one we posted earlier this month — and yet another one we posted last November:

By sheer dollar amounts, Indianapolis (roughly $13.5 million), Fort Wayne ($4.3 million), South Bend ($4.0 million), and Evansville Vanderburgh ($3.5 million) stand to lose the most in a 7.8 percent. But as a percentage of total revenues, the DeKalb County Eastern, West Central, Frankfort and Mississinewa school districts have the most to lose.

The average Indiana school district would lose less than one percent of its revenue as a result of the cuts, according to the Ed Money Watch numbers.

A report out last week from the Office of Management and Budget at the White House confirms the steep, across-the-board cuts triggered as a result of the failure of a Congressional “supercommittee” to compromise on budget cuts to reduce the federal deficit.

Earlier this summer the National Education Association released a state-by-state breakdown of what’s at stake based on a 7.8 to 8.4 percent cut level. That tracks with the 8.2 percent noted in the Office of Management and Budget report.