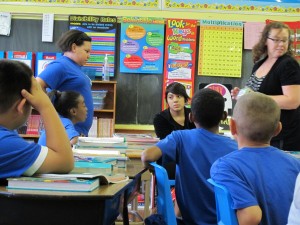 Students participate in a classroom activity at Our Lady of Hungary, a voucher-accepting Catholic school in South Bend.

A Fort Wayne family won’t have to send their son to public school to qualify for a tuition voucher because of kindergarten scholarship program that also makes students eligible for state support, writes Sarah Janssen for the Journal Gazette:

The state’s Choice Scholarship program provides publicly funded vouchers to families meeting certain income requirements to send children to private schools. The law mandates that children spend the previous school year in a public school to be eligible for a voucher.

Supporters of the program say it provides more educational opportunities for families and saves money the state would have otherwise paid to send students to public school. Others say the program is simply a way for families to receive a tax credit on tuition payments at schools they would have chosen anyway, while also providing a mechanism for parochial schools with declining enrollment to stay afloat.

Indiana lawmakers are considering an expansion to the state’s voucher program that will increase tuition support from $4,500 to $5,500. We wrote last week about the economics of voucher expansion.

State legislators initially proposed striking the requirement that students first spend a year in public school to qualify for a voucher but didn’t push through with the changes.