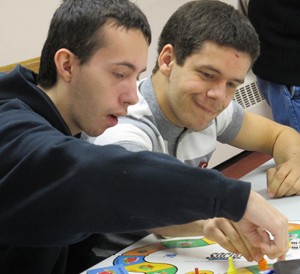 Tori Tackett, 20, plays a board game with another student in the CHOICE program, an initiative of the Northeast Indiana Special Education Cooperative.

No Indiana school district stands to lose more than 3 percent of its overall revenues if President Obama and Congressional leaders fail to reach an agreement before a looming budget deadline.

But if Indiana schools were to lose the estimated $114 million in federal K-12 education funding at stake in the so-called “fiscal cliff” debate, programs for some of the state’s most vulnerable student populations would feel a deeper impact.

That’s because dollars underwrite services for special education students — and by law, local districts must still fund those services even if those dollars fall victim to the automatic spending cuts coming at year’s-end.

In the bigger picture, Indiana districts would take a relatively minor hit from the automatic 8 percent reduction in discretionary spending, which wouldn’t kick in until next school year, when compared to the rest of the country.

Some argue allowing the cuts to take effect and the Bush-Obama tax cuts to expire on January 1 would make it much easier to bring the national debt down to a more “reasonable” level.

“We can bring the national debt under control in the medium term, simply by doing nothing, without hurting the long-term prospects for the economy,” writes James Kwak for The Atlantic.

But in the short term, states could be left to pick up a $1 billion tab from the federal government for costly special education services.

The View From Atop ‘The Cliff’

Federal dollars comprise half of the co-op’s $11 million budget.

Each student in the co-op, like all special education students, has an “individualized education plan” spelling out the services a school must provide. Because the services called for by a student’s “IEP” are protected by law, Burton isn’t afraid of a budget impasse hurting students’ education.

That said, Burton tells StateImpact that special education services cannot be rendered ‘on the cheap’:

The reality is our kids use a lot of assistive technology, a lot of very high-ticket items in order to access their education. Those things are getting a lot more high tech — what we’ve bought this year is antiquated next year. So we’re talking, for maybe even just one kid, $100,000 worth of equipment that we must provide in order for them to access their education… because of their IEP, which is generated because of their needs. That is becoming incredibly expensive.

I don’t know what the answer is going to be because yes, we do have less money. So where do we draw back?

What Education Spending Gets Cut — And What Doesn’t

Special education wouldn’t be the only victim if budget talks fall through. The automatic spending cuts would impact almost every federal program with at least two exceptions: school lunch programs and Pell Grants for low-income college undergraduates. Those programs aren’t affected.

But at the start of next year, federal funding would take a hit in almost every other Department of Education program. Title I funding for disadvantaged students would take a $1.3 billion hit, and special education funding would be cut by more than $1 billion.

Special education is “not going to be in a strong position to weather an 8 percent reduction in federal funding. It’s not like they’ve had flush years lately,” Delisle says.

Delisle, a former Republican staffer on Capitol Hill, says it’s hard to justify a broader federal role in education. But with a relatively small part of the federal budget, he says cutting from the U.S. Department of Education misses the bigger picture.

“We’ve promised ourselves a lot in terms of entitlements and most people get that we probably can’t make good on those promises,” Delisle says. “But there’s not enough money in the Department of Education to make good on all of those entitlement promises.”