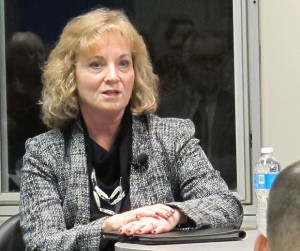 Once a teacher and school librarian, once a local union leader, once a longshot candidate for Indiana’s highest elected education post, Glenda Ritz gets a new title today:

To mark her first day on the job as state superintendent — the first day an Indiana Democrat has held the post since the early 1970s — here are 10 must-read StateImpact posts on what lies ahead for Ritz in her new job.