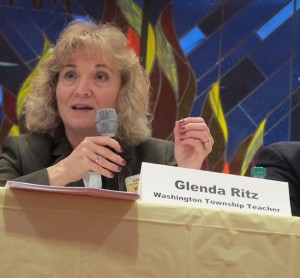 Maybe Glenda Ritz had it right early in her campaign to unseat GOP state superintendent Tony Bennett: If Indiana voters didn’t elect more of her fellow Democrats to statehouse office, she told supporters at an August rally, the next four years would be difficult for her.

And yet maybe Ritz can still work with Governor-elect Mike Pence and the Republican supermajority in the Indiana General Assembly — it’s hard to know until all parties are seated at the same table.

But the tea leaves are getting harder to read. It seems for every indication of common ground between Ritz and Republicans, there’s a reminder the two sides stand apart.

And then there are the words of outgoing Gov. Mitch Daniels, printed this weekend in the Indianapolis Star, claiming Indiana public school teachers illegally or improperly used their district e-mails to advocate for Glenda Ritz.

According to the Star’s D.C. bureau, Daniels said Wednesday:

If you’re a fan of anything-goes politics, it was a creative use of illegal — but still creative use — of public resources. We got emails sent out on school time by people who were supposed to be teaching someone at the time, all about Tony Bennett. We have parents who went to back to school night to find out how little Jebbie is doing and instead they got a diatribe about the upcoming election…

Despite the great progress that’s been made in states like ours, the forces of reaction never quit. The last twitch of the dinosaur’s tail can still kill you and that’s what happened.

A spokesperson for Indiana Republicans later told the Star the state party had received copies of e-mails about the election sent from teachers’ district accounts. A Ritz spokesperson said the campaign urged teachers to use their personal accounts.

Daniels’ remarks are an intriguing offshoot to a more central question that Indiana voters made very difficult to answer objectively: When it comes to education policy, who won November’s election? And more critically, why did whoever won win?

To a degree, trying to piece all of this apart is a futile exercise, as Jonathan Plucker (presciently) told StateImpact in October:

I personally found these things tend to be personality driven. Even if people agree on many issues, it really comes down to personality — how well do they get along, how much do they value the other person? You just don’t know that until they start working together. As interesting it is to play the parlor game of, ‘I wonder how x and y will get along?’ you just don’t know.

Supporters of Ritz need to be patient and understand her role. There may be times when she sees the writing-on-the-wall and does go along with an initiative that would be unpopular to most of her supporters as a way to be able to have more seats at the table when it comes to the “hows” of implementing that policy. It will not be helpful to anyone’s “cause” for her to simply be a contrarian to the rest of the board every step of the way.