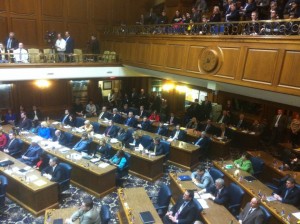 The Indiana House convenes for the 2013 legislative session.

Funding for K-12 education is “the biggest part of our budget as a single line item,” Indiana House Ways and Means Chairman Tim Brown said Monday, the first day of the 2013 legislative session.

“Of course every legislator looks at the corporations in his home district and wants to make sure things look better for them looking forward,” Brown told Lakeshore Public Broadcasting’s Steve Walsh during a legislative preview show.

“I don’t see any rollback of those critical reforms we enacted over the last two years,” Bosma told Walsh, adding that he’s met with Superintendent-elect Glenda Ritz and expects her to provide “constructive” feedback.

Bosma also discussed proposed legislation to increase the number of students who qualify for state voucher dollars. Earlier we wrote about the bill Sen. Carlin Yoder, R-Middlebury, filed to make siblings of current participants in the Indiana Choice Scholarship Program eligible for vouchers as well. Right now, students have to attend a public school for a year before they can receive a voucher.

Bosma says those rules were part of a “delicate balance getting the bill through the General Assembly” but adds that Governor-elect Mike Pence supports expansion of the program for certain groups, like foster families.

“We know there are folks who found a way to get their kids into the school that was best for them, but they aren’t eligible for a voucher” because of the timing of the legislation, Bosma said.

Other Education Legislation To Watch

More education bills have been filed since we wrote about the upcoming legislative session last week. Here’s a quick rundown: