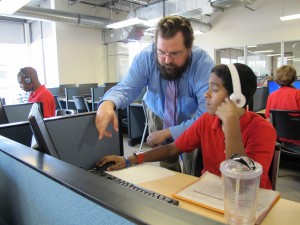 A student at Carpe Diem, an Indianapolis charter, gets help from a teacher in the school's learning center. 'Blended learning' splits time between classroom and computer.

If you haven’t heard of Rocketship Education, it’s time to start paying attention. CEO John Danner wants to expand his network of seven charter schools to serve a million students in 50 cities.

The Indiana Charter School Board has already approved Rocketship to open multiple schools in Indiana, including an Indianapolis school in 2015.

What sets Rocketship apart from other successful charters is a financial model that allows it to operate on government payments without continual infusions of cash from private donors. Many successful charter schools require additional funds to cover the costs of a longer school day, intensive tutoring and other expenses.

But after initial start-up costs, Rocketship schools are largely self-sufficient because they use technology to re-engineer the classroom.

For two hours each day, students are taught by computers designed to meet children at their particular level and drill them in rote skills like addition or subtraction. They spend the rest of the day in more typical classrooms with teachers, tackling more complex work like critical thinking.

Computers shave 25 percent from Rocketship’s labor costs — savings used to extend the school day to eight hours, pay higher salaries to its nonunion teachers and to construct its own school facilities, among other things. One Rocketship school is a replica of the next — everything is identical, down to the paint scheme: forest green and beige with purple accents.

If you’re interested in what Rocketship’s blended learning approach looks like, PBS NewsHour had this report last month. Reporter John Merrow calls each school’s learning lab — that is, the computer room — “the linchpin that makes Danner’s financial model tick.”

But teachers and principals say there’s a problem with Rocketship’s current model: It isn’t really working. Teachers generally tweak lessons based on how well students are mastering concepts. That’s hard to do when instruction happens in learning lab. And not every kid engages with the computers.

One principal told PBS big changes were coming to Rocketship’s model, predicting next year the computers will come out of the learning lab and go back into classes. But he’s confident that the schools will hit on a model that works.

Rocketship, of course, isn’t the only school experimenting with blended learning — last fall we wrote about Carpe Diem, which just opened in Indianapolis. Both schools are sponsored by the Indiana Charter School Board, and they’ve both been awarded multiple charters.

For years the Indianapolis Mayor’s Office and Ball State University handled the majority of charter school applications in the state. That changed when the legislature increased the number of eligible authorizers in 2011 and created the ICSB. It’s been incubated in the Department of Education but this month breaks off as an independent chartering organization.

The ICSB has already approved 14 schools, three of which are already open. Another 10 schools will open in August, plus Rocketship’s Indianapolis school in 2015.