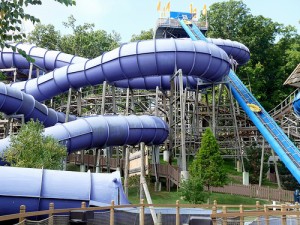 Holiday World and Splashin' Safari are backing the non-profit 'Save Indiana Summers' coalition, which advocates for a traditional school year. But others are worried about a different kind of summer slide and want more districts to adopt a balanced calendar.

Classes started Monday for students in some Indiana school corporations. If that seems early, it is. But as more schools adopt a balanced calendar, classes are starting in August to help curb summer learning loss.

The transition is not without backlash — a non-profit called Save Indiana Summers wants parents to have a say before districts adopt a balanced calendar.

The coalition has the support of companies that run summer tourism destinations Holiday World and Splashin’ Safari, according to The Indianapolis Star.

But supporters of the balanced calendar are worried about another kind of “summer slide.” The Center for Summer Learning argues for the balanced calendar and better summer school programs and offers a nice primer on summer learning loss. Research shows most students lose about two and a half months of math literacy in the summer months when it’s unlikely they’re practicing math skills.

Losses in reading comprehension are most profound among low-income students who don’t have access to books at home.

Indianapolis Public Schools, which moved to a balanced calendar last August, requires struggling students to attend remediation during intersessions throughout the year. But Scott Elliott at The Star noted last year the district had to use substitutes during school breaks because enough educators didn’t sign up to teach the extra classes.

The Indiana Department of Education doesn’t track how many districts have made the move to a balanced calendar. Public schools in Indiana have to offer 180 days of class per year.

It’s one of the criticisms Save Indiana Summers has with the balanced calendar. The group argues that starting school earlier isn’t beneficial if it doesn’t add any additional time in the classroom.

“We did a fair amount of communication with our community especially on social media sites. The reaction to the balanced calendar has overall been very positive. … At the moment, going back to school seems early but it will feel nice in October.”
—Margaret Hoernemann, Avon Superintendent

Elsewhere in the country, some schools are doing exactly that. Charter schools are more likely than public schools to add days to the academic year, according to The New York Times. But not everyone likes have their kids in class for 190 or 200 days, either. The Times‘ Motoko Rich explains:

Teachers’ unions, parents who want to preserve summers for family vacations and those who worry that children already come under too much academic stress argue that extended school time is not the answer. Research on longer school days or years also shows mixed results.

But studies also show that during the summer break, students — particularly those from low-income families — tend to forget what they learned in the school year. Getting back to school early, supporters of a longer calendar say, is one of the best ways to narrow an achievement gap between rich and poor students.

Many charter schools, including those in the academically successful KIPP network, attribute their achievement in part to longer days and calendars.

The National Center on Time and Learning keeps track of how long students are spending in schools across the country. Only about 15 Indiana schools adopted a calendar of more than 180 days in 2011-12. Nearly all of them were charters.

Should parents have a say if a district is considering a balanced calendar? Are your kids already back to school?