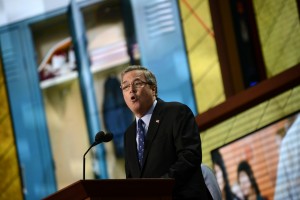 Forty-six states and the District of Columbia are on track to adopt the Common Core by 2014, but federal support for new academic standards is likely to diminish if Mitt Romney is elected in November. The Republican presidential candidate told NBC’s Brian Williams he doesn’t believe states should receive financial help to implement the changes, writes Alyson Klein for Education Week:

“I don’t happen to believe that every time there’s an initiative that comes along, the federal government should finance it,” Romney said during NBC’s Education Nation, noting that the state he governed, Massachusetts, was able to boost its standards without having any extra federal funding.

“You know, I think it’s fine for people to lay out what they think core subjects might be and to suggest a pedagogy and being able to provide that learning to our kids,” Romney said. “I don’t subscribe to the idea of the federal government trying to push a common core on various states. It’s one thing to put it out as a model and let people adopt it as they will, but to financially reward states based upon accepting the federal government’s idea of a curriculum, I think, is a mistake. And the reason I say that is that there may be a time when the government has an agenda that it wants to promote.”

It’s not surprising that Romney plans to break with the policies of the Obama administration, which has incentivized states to adopt the standards with Race to the Top dollars. But what is surprising is strong support from the right for the same standards — including former Florida Gov. Jeb Bush, who pointed out in an Education Week interview during the Republican National Convention that a majority of GOP governors are on board with the Common Core.

Bush has championed many education initiatives that will sound familiar to Hoosiers, like A-F grading for schools, teacher evaluations, performance based pay, expansive voucher programs and expanded charter school options. He’s been an inspiration to other Republican leaders, like Indiana Superintendent of Public Instruction, Tony Bennett. He even penned the introduction to Romney’s white paper on education, leading many to believe he could be tapped for the top schools job if Republicans take the White House.

But there are some Republicans who disagree strongly with Bush’s assertion that the push to adopt common academic standards came from the states. Here’s Klein’s recap from the convention in Tampa:

The Republican party platform embraces high standards, but is silent on the common core, to the disappointment of some GOP activists. Christel Swasey, a former high school English teacher from Utah, submitted anti-common core language to a portion of the RNC website soliciting ideas for the platform from voters around the country. Swasey’s language was never formally introduced in the platform committee, she told me. But it made its way to the inboxes of delegates at the convention who are skeptical of common core.

She’s disappointed that Mitt Romney hasn’t come out against the standards. His position, as outlined in a white paper, is that states should be free to work together to create rigorous standards. But he doesn’t mention common core by name.

Swasey also told Klein she was surprised when she found out that prominent Romney supporters are in favor of the Common Core standards.

But it’s hardly a new divide. Earlier this year, one Republican governor — South Carolina’s Nikki Haley — said she’d support a legislative attempt to block implementation of the new standards, which were adopted under her predecessor. From USA Today:

All but four states — Alaska, Nebraska, Texas and Virginia — quickly signed on to the standards, known as the Common Core, agreeing to help create then implement them by 2014. Their decision was helped partly by President Obama, who has tied “college and career-ready standards” to billions in federal grants. Last September, he all but required adoption of the Common Core or similar standards approved by state higher education officials if states want to receive federal waivers from the 2002 No Child Left Behind law. One of the four states, Virginia, applied for a waiver without adopting Common Core and is in negotiations with the administration over its plan.

That angered conservatives, who point out that even though adopting the Common Core is voluntary, Obama’s moves make it all but obligatory.

Dissent in the ranks is probably why the Republican education platform focuses chiefly on school choice, not specific curriculum initiatives, so it will be interesting to see where Romney lands on schools if elected. One note: Whether we’re talking about teachers unions backing political candidates or across-the-aisle support for parent trigger laws, it’s become abundantly clear that education policy doesn’t always fall along clear party lines.