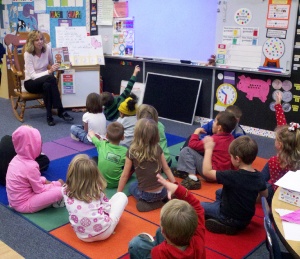 This session state legislators will consider a proposal to withdraw Indiana from the Common Core, a set of new academic standards adopted by 45 states and the District of Columbia.

Sen. Scott Schneider’s bill* is the latest challenge to the standards, for which outgoing state superintendent Tony Bennett pushed in 2010.

But whether Indiana should continue with Common Core implementation isn’t the only discussion. What the new standards will actually mean for teachers is also up for debate.

That’s why we like this story from our friends at StateImpact Florida, who teamed up with WABE in Atlanta to show how teachers are using Common Core in their classrooms:

Students in Stormi Johnson’s third grade math class at the Marietta Center for Advanced Academics near Atlanta are preparing for the new assessments. On this day, they’re tackling word problems.

“What else does the problem give us?” Johnson asked her students. “We know 28 in all. Prenna?”

Prenna answers, “We know 28, but we don’t know the unknown number.”

Prenna goes on to solve the problem.Then, Sean raises his hand.

“I disagree,” he says, and explains why.

That’s what students in Common Core states are learning to do — explain their reasoning. Johnson says that means they have to do more than simple calculations.

“I need you to show me you understand the procedures with a picture, with sentences. So that’s been the tricky part for the kids,” Johnson said.

Reporters Gina Jordan and Martha Dalton say it’s important to note that standards are different than curriculum. We’ll second that. Common Core provides guidance on what students need to know, but teachers must decide how to teach it. They’re still writing lesson plans and designing curriculum, often without the guidance of textbooks and training manuals (the publishing world hasn’t quite caught up to the new standards).

Indiana is in what the Department of Education calls the “developing” phase of implementation. Kindergarten and first grade teachers should be using the standards in their classrooms, and second grade will, too, next year. But it’ll be 2014 before everyone else joins them. That’s the school year the state will drop the ISTEP+ in favor of a new assessment tool called PARCC — barring of course Indiana doesn’t become the first state to dump the Common Core.

Correction: An earlier version of this story identified Sen. Carlin Yoder as the author of the bill to withdraw Indiana from the Common Core state standards. The bill is actually Scott Schneider’s. Yoder is the author of a bill that would expand Indiana’s voucher program.