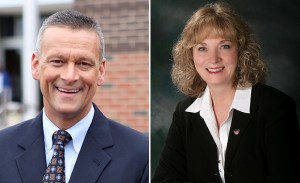 If the state superintendent’s race will be decided on a question of whether incumbent Tony Bennett‘s education policies push too far too fast, here’s how the editorial board of the Fort Wayne Journal Gazette answered in its endorsement of his challenger, Glenda Ritz:

Indiana enjoyed almost 24 years of steady, collaborative effort to improve public education under Republicans H. Dean Evans and Suellen Reed, but Bennett’s election four years ago marked an end to the partnership among policymakers, educators, parents and the business community. The noteworthy improvement Indiana schools have made in recent years, including higher graduation rates, is the result of the foundation Evans and Reed set.

Rather than follow their example, Bennett cleaned house, replacing experienced educators with a DOE staff whose frequent turnover has left school districts struggling to interpret rules and requirements. He took advantage of GOP majorities to push an expansive legislative agenda, including the nation’s most expansive voucher program. Before its effects are even known, he is looking to extend it, eliminating the restriction that vouchers go only to students who first attend public school.

The newspaper also takes Bennett to task for putting more state dollars in the hands of for-profit charter school operators and pushing for legislation that makes it easier to get a teaching license in Indiana.

Ritz, a teacher in Indianapolis’ Washington Township, gets the Journal Gazette‘s endorsement for her 32 years of experience and plan to rework the Indiana Department of Education from the “bottom up.” But she still faces an uphill battle when it comes to fundraising.

The release of the latest campaign finance reports is still a few weeks away, but it looks like Bennett will have brought in more than a million dollars. By contrast, Ritz has about $100,000 to make her final push. We’ve written about the number of large contributions that have come in for Bennett from out-of-state, which the Journal Gazette calls “troubling.” The newspaper notes Bennett’s predecessor, longtime state superintendent Suellen Reed, ran her final campaign in 2004 with about $39,000.

But Bennett has defended his aggressive push to transform Indiana schools, telling StateImpact he’d prefer to advocate for change now rather than wait for students to fail. He also adds that Ritz has had the same opportunities to court out-of-state donors and he won’t apologize for running a political race:

We have very strong Republicans. We have very strong Democrats. We have the most prominent independent in the United States in (New York Mayor) Michael Bloomberg. So we haven’t just raised money along party lines. We’ve raised money really through individuals who have a strong belief that education reform in Indiana is a model for the country and they want us to succeed. I am honored that they feel that way. I frankly don’t apologize for the level of fundraising we’ve done in state and out of state because it would also be misplaced to not recognize that we have a large proportion of our dollars from in state as well. We have attracted a very loyal donor base based on the fact that people believe Indiana education is heading in the right direction.

Ritz has said she won’t accept large out-of-state contributions and is relying on grassroots support from local teachers unions to run her race. Her biggest supporter is the Indiana State Teachers Association.