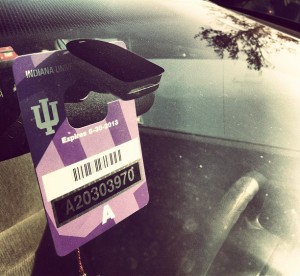 A parking pass hangs on the rear view mirror of a vehicle parked on the IU campus.

Representatives for Indiana University’s Faculty Council expressed deep concerns Friday about a potential plan to privatize parking operations on both the Bloomington and Indianapolis campuses that administrators believe could bring a hundred-million-dollar windfall to the school.

“We believe that what in the short run appears to be attractive and seductive will haunt the university in the long-run,” Carolyn Calloway-Thomas, co-secretary for the University Faculty Council, told IU Trustees during their meeting. She later compared such a privatization plan to a payday loan.

In a short period of time, Indiana University officials could issue a request for proposals which would seek a trade: a private firm gives a large lump sum of money to the school in exchange for running IU’s parking operations for years to come.

It is not a sell-off of assets, says IU spokesman Mark Land, but a lease to help fund current operations.

Without a request for proposals, it’s not possible to say exactly how much money a parking privatization deal could generate for IU.

University administrators have compared a lease of parking assets to a deal at Ohio State University, where officials received a $483 million up-front investment from a private firm in exchange for control over the school’s parking operations over the next 50 years.

IU Senior Vice President and CFO Neil Theobald says parking services — a $23-million-dollar per year revenue generator for the school — is not a core mission of the university. 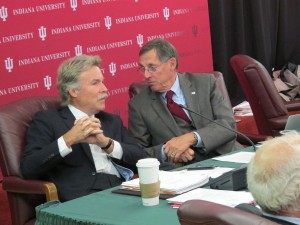 IU Trustees Patrick Shoulders and William Cast confer during a break at the university's Board of Trustees meeting in Bloomington.

“We’re here to educate and do research,” Theobold told Indiana Public Media. “We operate parking facilities, but if there is a private enterprise who can do it more efficiently than we can, then we save money by having them do it.”

In her remarks before the Trustees, Calloway-Thomas added she was worried about the effects of the potential deal on current IU staff, who’ve expressed fear for their jobs should parking be privatized.

UPDATE — After the meeting, IU Senior VP and CFO Neil Theobald spoke to StateImpact. On Calloway-Thomas’ concerns the parking deal could be a short-term gain that is bad for the university in the long-term, he said:

It depends on what you do with the money, of course. If you put the money into short-term expenditures that don’t have long-term benefit, then the point is exactly right. If you, for example, were to put it in an endowment — we have an endowment at the [IU] Foundation that pays out 5 percent per year — well that’s forever. If you’re able to get a larger amount of money than your able to generate it by running it yourself, you put it in an endowment, you have more money than you would otherwise.

On concerns of staff that privatization could create job losses, Theobald told StateImpact:

Specifically for the people who work in parking on campus, we will work with them to find them another job on campus. We’re not going to do this on the backs of our employees — that’s not the idea at all. It’s a relatively [small] number of people work at parking. We have a very large staff. We will find jobs for them.