Two of the candidates to succeed Gov. Mitch Daniels — whose term was marked by major shifts in the state’s education policies — spoke to StateImpact about their stances on issues facing the state’s schools as part of our continuing election coverage.

But while both agree on the importance of vocational and early childhood education, the candidates stand far apart on issues such as Indiana’s expansive voucher program and teacher evaluations.

Find links to the full audio of StateImpact‘s interviews with both candidates, along with complete transcripts, below the jump.

Here are a few highlights from the candidates’ interviews:

On vocational education: “When a lot of our kids see that there’s a pathway to a job in high school, I think it’s going to increase our graduation rates… I really believe that and in talking with businesses large and small, there’s a lot of openness to it, because again, they’re spending that money now hiring men and women into their company and spending a lot of money training them to get them up to speed.” 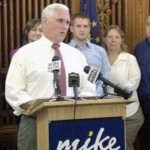 On early childhood education: “What I would purpose to do if I was elected governor of Indiana is use that existing infrastructure around the state of Indiana, identify where that’s not happening in communities and see if there’s a way in working in conjunction with the legislature to find ways that we can make Pre-K programs — local, organic Pre-K programs more successful and more available to at-risk kids in our state.”

On school choice: “I think there’s nothing that ails education in Indiana that can’t be fixed if you give parents more choices and teachers more freedom to teach… You create that environment of innovation and of competition, all driven by parental choice and by greater freedom and flexibility in the delivery of education services in this state.”

On teacher evaluations: “We ought to have an information feedback loop for teachers. But I think there’s a real argument, and I look forward to engaging with the Department of Education, legislators, teachers and superintendents to say, ‘How can we free up that classroom time and allow teachers to have the freedom and the flexibility to do what they know how to do?'”

On early childhood education: “What everybody tells me — all the experts, anything you read — is that the more money you spend in the Pre-K years, the early childhood development, I’ve heard that for every dollar that we put in, by the time that student is through school, we’ve seen a $7 return on that. What it means is that if we spend this money before they’re in Kindergarten, then we won’t need aides working, possibly, with all the children we have now. That teacher will have freed up time to spend with some of the students that are ahead of the curve, as opposed to behind it.”

On school choice: “This current administration has declared war on public education. The day I’m elected is when the war on public education and public educators, our schoolteachers, quits. That fear of this high stakes testing is legitimate because there’s a mindset that wants to do nothing, I’m convinced, but constantly beat down our public schools. And I don’t think that solves the problem. I’m not a fan of vouchers.”

On teacher evaluations: “I do not think that the evaluations as currently done, without allowing teachers any input in the process is the way to go… [Teachers] all can’t be bad. They all tell me they can be better, so why would you not allow them to have input in what criteria?”