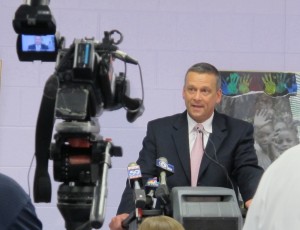 Tony Bennett reported another large campaign contribution Monday, the latest in a string of gifts that has netted the Republican state superintendent’s re-election campaign at least $175,000 since August 31.

Richard Kern, a former CEO of a Wisconsin manufacturing company, donated $50,000 to Bennett’s campaign Monday. The Kern Family Foundation also partners with Project Lead The Way, a non-profit organization that writes math and science curriculum and that relocated its headquarters to Indianapolis last year.

Bennett is already way ahead in the money race against his Democratic challenger, Glenda Ritz.

Out-of-state contributions tend to raise eyebrows, says Andrew Downs, who directs the Mike Downs Center for Indiana Politics at IPFW. But he says such gifts are not unusual for candidates running for statewide office — even in down-ballot races — and adds Bennett’s high fundraising numbers more likely reflect his rising political star.

“He is certainly making it a more high-profile race,” Downs tells StateImpact. “We can’t exactly call it top of the ticket yet by any stretch, but he certainly is making it a higher-profile among the other state offices. And if he has political aspirations to go beyond this office, then what he is doing is good practice to run for governor or for U.S. Senate.”