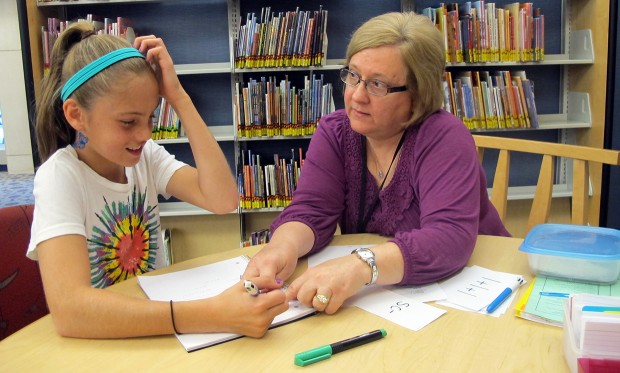 Alex Stein, 9, practices spelling with her tutor, Joyce Prill. Stein gets tutored twice a week because she has dyslexia, a language-based learning disability that can make reading and learning difficult.

When Jackie Stein saw her daughter struggling to learn to read, she asked Alex’s first grade teacher how she could help. The teacher’s response surprised her: Alex was developmentally appropriate. If the Steins were worried, they could work more with their daughter at home.

So Jackie tried to help her daughter with reading. Alex continued to struggle, though. That’s when a family friend suggested Alex might have dyslexia, a language-based learning disability. So Jackie contacted the Dyslexia Institute of Indiana to get Alex tested.

Now in third grade, Alex works with a tutor twice a week at the Fishers Public Library. They review letters and sounds and practice reading and spelling. One of the techniques that really helps Alex is finger spelling.

Most kids think about letters before they write a word. But not Alex.

“Dyslexia is when you have trouble reading, mostly, and it’s a little harder for you in school than other kids would.”
—Alex Stein, third grader

“So you’ll go like s-p-o-t with your fingers,” she says, tapping out the sounds instead.

People with dyslexia don’t process information the same way most people do … their brains may even be wired differently. When Alex reads, she often confuses b’s with d’s. Some people with dyslexia see n’s instead of r’s. To help people who don’t have dyslexia understand how frustrating it can be to decipher words and letters, tutors use simulations that mimic how a dyslexic brain views words. Here’s an example:

An old wom an dakeb some gin gerdreab. She hab some bough left ov er, so she mabe the sha be of a little man. She mape eyes, anoseand a smil ing mouth andpl aceq curra ntsbown his front to look like du ttons. Thenshe laib hi mon a qak ingtray and put himint he oven. After a while, som ething rattlebat theo ven boor. She ope nedit and out ju mped the littlegin gerdreab man. She triep to catch him duthes lippeb dast her, ca llingas he ran, “Run, run, as fast as you can. You can’t catch me, I’m the gingerdreab man!”

There’s no one way that a person with dyslexia sees words on a page, but there is one way to teach reading that seems to help. It’s a multi-sensory approach to learning letters and sounds that Alex practices twice a week with her tutor.

Jackie says the difference tutoring has had on her daughter is profound.

“I see her enjoying reading, I see her being able to comprehend what she has read,” says Jackie. “She now even reads with expression. Before, it was really laborious for her to get through a word and just wasn’t enjoyable.”

Why Statewide Standardized Tests Have Parents On Edge

But the extra help comes at a cost. Tutoring is expensive — about $50 per session, or more than $400 per month.

“It’s certainly something we think about when we’re making decisions about what to do, vacations to take, other activities to factor in. Not only is it the cost, but it’s the time commitment, too,” says Jackie, who drives her daughter twice a week to the library after school. While Alex works with her tutor, Jackie works on other schoolwork with her younger daughter, Avery.

Jackie says it’s worth it to make sure Alex gets the help she needs. Still, she wishes students with dyslexia received more support at school.

Alex’s teachers make some accommodations. She doesn’t get counted off for spelling mistakes when she’s writing in class, just when she takes a spelling test. And she gets extra time to take classroom tests.

But this spring, when it’s time to take statewide standardized tests, Alex won’t get extra time. That’s news to Alex, who’s used to having a few more minutes to use the techniques she learns in tutoring to sound out words and check her work. And it’s nerve-wracking for Jackie because students in Indiana have to pass the IREAD-3 before they move on to fourth grade.

“We don’t yet know what that’s going to be like, you know, how her learning disability is going to effect how she tests,” says Jackie.

Why Dyslexia Doesn’t Always Count As A Learning Disability

Most students with special needs can qualify for a good cause exemption that allows them to move onto fourth grade even if they don’t pass. But in Indiana, dyslexia isn’t an eligibility category for special education. Instead, it’s counted as a specific learning disability, and schools determine what interventions students need on a case-by-case basis.

So there’s help for students who struggle with language-based learning disabilities, but qualifying for services can be tricky. 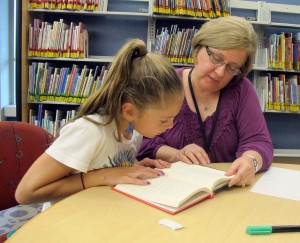 At the end of her tutoring session on Sept. 13, 2012, Alex Stein reads from 'The Boxcar Children.' Her mother, Jackie Stein, says her daughter is a more enthusiastic reader after a dyslexia diagnosis prompted the family to hire a tutor.

Rosie Hickle is executive director for the Dyslexia Institute of Indiana. She’s been working with kids like Alex for 17 years. She says the signs of dyslexia — so easy for her to spot — often go unnoticed in mainstream classrooms.

“For the kids that have dyslexia, it’s not that what they’re doing in the schools is bad, it’s just that it’s confusing to them sometimes, and it goes too fast,” says Hickle.

Hickle says many kids with dyslexia are bright and engaging, so teachers don’t always notice when they start to fall behind. But oftentimes students with dyslexia aren’t learning the letters and sounds that become the building blocks of language. They’re just memorizing words … and eventually they hit a wall. They can’t read, they can’t spell, and they get frustrated.

Tutoring helps. But Jackie Stein says for parents of students with dyslexia, it’s a catch-22.

Jackie says she sleeps better at night knowing her daughter is learning to read and keeping pace with her peers. But she also wants to see Indiana take notes from neighboring Ohio, where legislation passed last year recognizing dyslexia as a learning disability.

“Think of how it could impact test scores if they were able to look at all these kids individually and give them what they need to be able to test better, and if that includes extra time like in the case with Alex, that would be better, too,” says Jackie.

After all, she says the stakes this spring aren’t just high for her daughter … because of Indiana’s accountability rules, they’re high for Alex’s school as well.