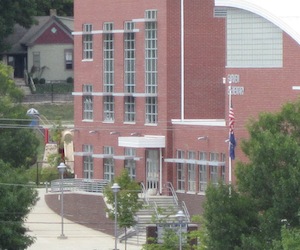 Fairview Elementary in Bloomington, part of Monroe County Community School Corporation. The district is one of 23 that has informed the federal government of their intent to apply for a Race To The Top grant.

Now that we know which Indiana districts plan to apply for a share of a $400 million pot of federal prize money, of sorts, a commenter wondered if there will be any “strings attached” for districts who win the latest the latest Race To The Top competition.

Indeed there are strings attached. Pretty big ones. Winning districts will have to…

The commenter’s question (Thanks, Jenny Robinson!) is pretty salient. The previous Race To The Top competition — the original, started back in 2010 — has hit snags in a few states who’ve run into trouble implementing similar “strings-attached” policies.

A map of Indiana districts that have formally expressed their intention to apply for a federal Race To The Top grant. (Source: U.S. Dep’t of Education)

As we wrote Friday, Obama administration education officials intend to divvy the $400 million pot into shares of between $5 and $40 million divided among 15 to 25 school districts. It’s all part of a competition to reward districts who “demonstrate how they can personalize education for all students in their schools.”

The feds are also giving out the money as a means of encouraging districts to adopt new policies the Obama administration favors, such as teacher evaluations.

Many Indiana districts should have their bases covered when it comes to these “strings-attached” requirements. A statewide mandate for districts to evaluate all teachers and principals took effect this year. State education officials are leading the charge to adopt and implement the Common Core State Standards.

But the requirements could put some Indiana districts who apply — or win — in a funny spot:

Just to clarify once again, though, all we’ve heard are which Indiana districts have officially submitted their intent to apply. Not all of them will necessarily turn in their application, which is due at the end of October.

Of course, all of the requirements tied to the Race To The Top money are, in themselves, the subject of much debate.

Education historian Diane Ravitch has criticized U.S. Secretary of Education Arne Duncan for voicing his “opposition to teaching to the test, although his own Race to the Top demands it.”

But Michael Horn blogs for Forbes that there’s a lot of upside to the competition, too:

This Race to the Top competition does have the potential to reset American schools’ relationship with technology by encouraging a transformation from a one-size-fits all schooling model to one that can customize affordably for each student’s unique learning needs. The Department’s recent revisions to the competition’s rules were also smart and increase the chances of the competition’s success.