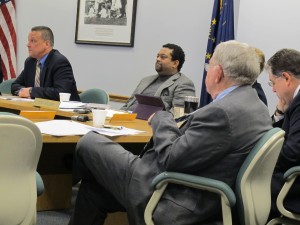 The Indiana State Board of Education met Wednesday — led by state superintendent Tony Bennett (left) — to approve new metrics for grading schools on an A-F scale.A

All Indiana schools will now earn state letter grade ratings based not only on changes in the school’s passage rates on state tests, but on “growth” in individual students’ test scores from year to year.

The Indiana State Board of Education approved this move by a 6-2 vote Wednesday morning as part of an effort to rewire the state’s school rating system.

In addition, Indiana high schools’ letter grades will include graduation rates and the number of students earning college credits or professional certifications for the first time.

Opponents of the new rule say the move could set the table for additional state takeovers or interventions in underperforming schools, and fear the new system is too complex.

The measure’s timing is critical. State officials have aligned the remake of their letter grade system with Indiana’s request for a waiver from requirements of the federal No Child Left Behind law, which the state filed in November — about the same time the proposal first came before the State Board of Education.

State superintendent Tony Bennett stressed the federal government has not officially approved or denied Indiana’s NCLB waiver application. But Bennett told the board he felt, given federal education officials’ feedback on the application, the changes were appropriate.

“We feel what is in front of you today, they [federal officials] will find to be an appropriate measure of flexibility under No Child Left Behind,” Bennett told the meeting.

Opponents of the new grading system who spoke at the meeting stressed a criticism they voiced during a January meeting: the new formula relies on statistically-flawed measures that could hurt schools.

“Using bell-shaped curve statistics in the formula is not appropriate for our elementary and our middle school students,” said Vic Smith of the Indiana Coalition for Public Education. (He did not speak representing the organization.)

Byron Ernest, a Lebanon agriculture science teacher and former Indiana Teacher of the Year, said he supported the changes, saying the focus on growth has helped him and his colleagues focus on finding ways to improve.

“Our teachers are beginning to realize that what they do in their classroom affects every other classroom in the school, and I think the A-to-F model does that,” Ernest said.

The State Board of Education is an executive body comprised of ten members, whom the governor appoints to oversee the Indiana Department of Education’s implementation of laws passed by the General Assembly.

The board isn’t a legislative body, however, and some legislative observers wonder whether the changes are significant enough to require state lawmakers to give their own blessing to the new rules.